A lone player reportedly tested positive for the coronavirus last week forcing the others to quarantine for 14 days, keeping them out of action against Renaissance High School last Friday.

DETROIT (FOX 2) - Cass Tech parents, students and coaches are frustrated after 50 football players were sidelined because of the city’s Covid protocols.

"For me personally, I’m a senior, so it’s very frustrating not being able to play with my guys," said Masai Reddick. "Along with it being the first home game of the season and it being a night game, knowing everybody was going to be there."

A lone player reportedly tested positive for the coronavirus last week forcing the others to quarantine for 14 days, keeping them out of action against Renaissance High School last Friday.

"We have seniors on the team that need film, they need footage, they’re trying to be seen, they want to get to college and we can’t do that if they’re sat on the sideline," said Cass Tech parent Kimberly Anderson esq.

Not to mention, out of the classroom.

"I really feel face-to-face learning is better," said player Donovan Evans. "And we were supposed to take the field today, JV, vs. King and that didn't happen, it got canceled."

"My kid has no symptoms," said Rana Robinson. "He has multiple negative tests and you're telling me I can't bring my child to school, is very frustrating."

And speaking of negative tests, the lone player said to have tested positive prompting others to quarantine, later received three negative test results.

Parents think the first test was a false positive.

"We need to have a way for our boys to be able to be safe," Anderson said. "But to be able to get on the field as long as they’re testing negative."

Only 18 players took the field against Renaissance last Friday. An exception was made for those players because they’re all vaccinated

"If we were to proceed as current that means, it’s almost like a vaccine mandate-because your son can’t play if he’s not vaccinated," said parent Regina Reddick.

Friday’s game is at Cass Tech against East English Village.

that’s a homecoming game, so this will be our last home game of the season," said Masai Reddick.

FOX 2: "A homecoming game and there’s a chance 50 guys may be sitting out?"

"Yes and 90 percent of those guys are seniors as well," he said.

"Our principal is behind us, our coach is behind us, from what I’ve read, (Supt) Dr.Nikolai Vitti is behind us," Anderson said. "We just need to get the health department to get on deck so that our kids can compete, and be out here on the field Friday and be in the classroom as soon as possible, most importantly." 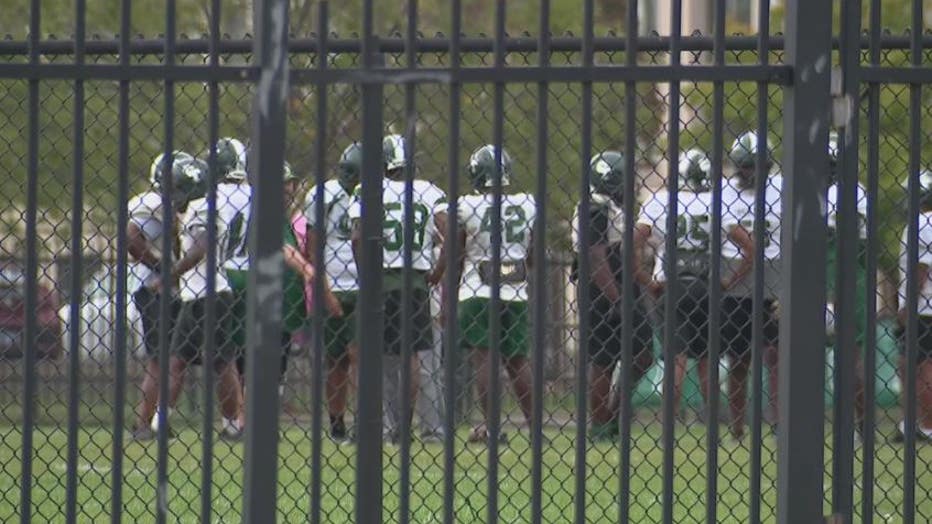 Vitti released a statement from DPSCD saying they are working with the city's health department to adjust the quarantine recommendations.

"The Detroit Health Department met with representatives today to discuss protocols to ensure the safety of all students and staff. We have agreed on a process that we are both satisfied with regarding quarantining and safety measures. We will continue to monitor the overall infection rate in the City of Detroit and make adjustments accordingly."

Vitti's full statement is below:

"Only players who were vaccinated played Friday and can continue to attend school, practice, and likely play in the next game. As a district, we do not determine the quarantine timeframe, the Detroit Health Department does. Their standard is 14 days of quarantine for unvaccinated players or students as close contacts to a positive case.

"They determined that any positive test must be treated as a positive case, even if later tests were returned as negative. We believe the Detroit Health Department need to provide greater flexibility to the district as permitted by the Michigan Health Department. For example, a close contact can avoid quarantining if they test daily. Or, negative testing asymptomatic students (or players) should only quarantine for 3-7 days. 14 days is excessive, especially when we are social distancing as a district (3 feet), masking in school, and most importantly, testing all employees and students (especially athletes) weekly.