On a night when fewer police officers were on scene compared to previous evenings when protests occurred in Detroit, a small group of people numbering between 20 to 30 surrounded two police vehicles that were attempting to divert protesters down a less busy road. Craig said that's when "agitation escalated into violence-behavior."

Detroit police chief James Craig held a news conference less than 24 hours after an officer was seen accelerating a police vehicle through a crowd of protesters at Vernor and Dix Sunday.

As one squad car was slowly moving forward, some people jumped on the hood of the vehicle. Simultaneously, loud banging was heard on the exterior of the vehicle, including the sound of the rear-window shattering. Concerned they may be getting shot at, officers accelerated into protesters that were obstructing the officer's view.

That's how Craig describes the incident, part of which was posted as a video on social media late Sunday night. In it, a 27-second clip shows a squad car moving forward as it's surrounded by dozens of individuals before accelerating faster and faster. Several people were filmed rolling off the hood of the vehicle as people chased after it.

Emphasizing the investigation was less than 24-hours old, Craig said showed two separate clips of the scene during a Monday press conference with reporters.

"At this point, they're moving the car to move the protesters but at some point when the speed increases, I think the speed increases to about 25 mph, that was just as the rear window was smashed out," said Craig, speaking over dashcam footage replay taken from the squad car that collided with protesters.

In it, several individuals walk in front of the vehicle and one man sits on the hood. Craig said that's when officers began hearing banging and the window was smashed which prompted the boost of speed.

In a second video taken from an adjacent police car, the scene is captured from a different angle. It also features sound that included loud banging which officers attributed to contact being made against the squad car.

Detroit Police Chief James Craig said protesters surrounded the police car and broke out the back window of the car.

Craig said last night's result reminded him of the first few nights of protests in Detroit, which took place a month ago after the officer-involved killing of a black man in Minneapolis. While the majority of individuals who were protesting were peaceful - counting about 300-350 people - there were some who became very angry after the night chief duty officer made attempts to meet with the organizer, Craig said.

"As he tried to make that effort, he decided to back off and not try to engage further. That was the first clue...," he said.

Craig added that officers also believed some individuals were armed with hammers. He also cited a message police officers read from a woman who said she was at the protest and decided to leave because "they were plotting to provoke the police. As I was leaving, I saw those same guys hitting the police vehicle for no reason." 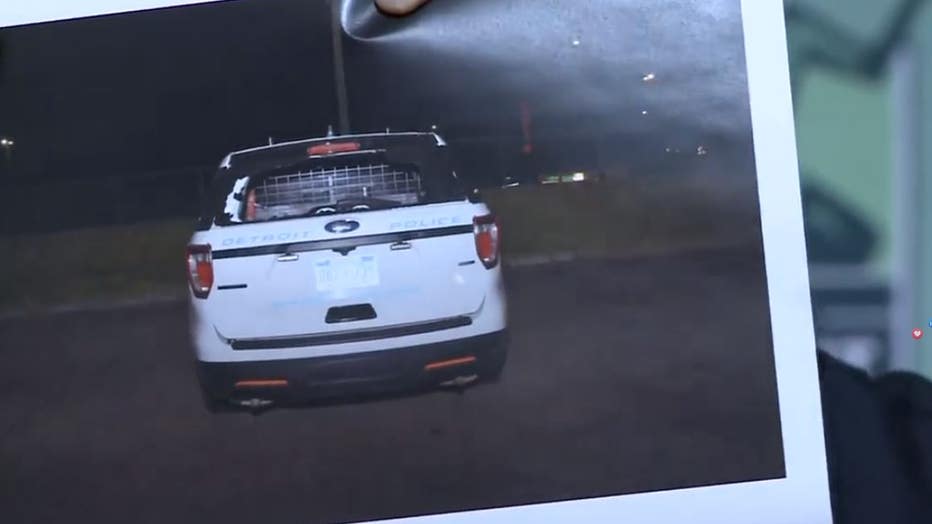 A photo showing the smashed-out rear window of a squad vehicle involved in a scene Sunday night when protesters collided with a Detroit Police unit.

Officers said the confrontation took place shortly after officers in the two squad cars decided to divert the protesters from Vernor Highway onto Dix Street due to less traffic.

It's unclear how the rearview window was broken, Craig saying it could have been a skateboard but wasn't sure. Broken glass from the window was also found at the scene.

"We didn't know what broke it, but whatever it was, it created enough concern for officers and their safety," he said.

After a month of mostly-peaceful protests, Detroit Police have scaled back the presence of active units monitoring the demonstrations. In past protests, there had been community members present to keep the scene peaceful, as well as more officers monitoring the scene. In recent days, units have taken to shadowing the protesters.

The incident remains under investigation. The officers involved have not been placed on administrative leave.