Jupiter and Saturn seen close together over Dublin, Ireland on Sunday. (Credit: Gary Stevenson via Storyful)

Mesmerizing videos of the anticipated "Christmas Star" were captured around the world on Sunday and Monday.

This year, the celestial alignment will be visible in the night sky for several days.

Jupiter and Saturn aligned in the night sky over Karachi, Pakistan, on Monday, December 21. (Credit: Abubaker Shekhani via Storyful)

Jupiter and Saturn aligned over the sunset in Miami Beach, Florida, on Monday, December 21.

In videos from the U.S., India, Pakistan and Ireland, a glowing white circle, which is Jupiter, can be seen in close relation to a flat, orange-colored disk shape, which is Saturn, in the nighttime sky.

This is the first time Jupiter and Saturn have been as close to each other in nearly 400 years, according to NASA.

Although Jupiter and Saturn regularly pass each other and align once every 20 years, it’s been nearly 800 years since the alignment occurred at night, allowing nearly everyone around the world to observe the event, NASA said. 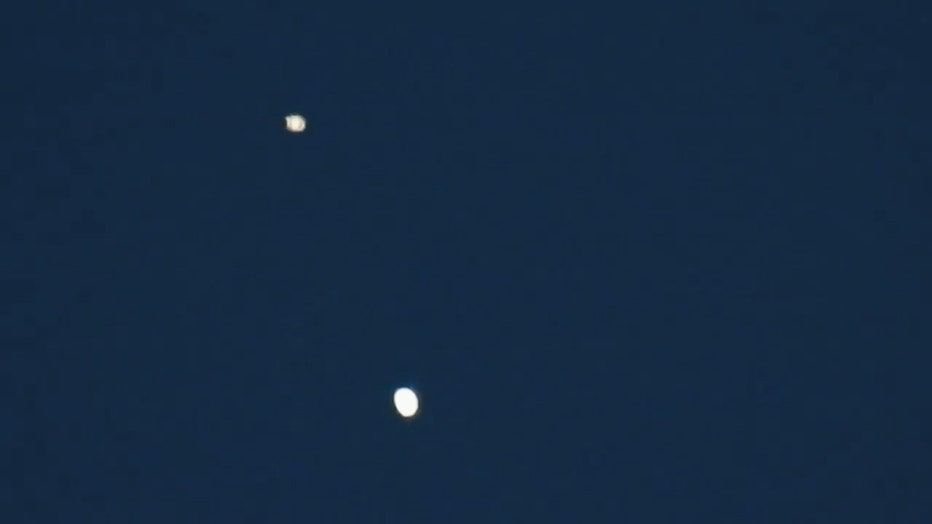 RELATED: ‘Christmas star’: Jupiter and Saturn to align at closest distance in 400 years — here’s how to watch

"Jupiter and Saturn are going to be just a 10th of a degree apart in the sky, which is so close that if you extend your pinky out at arm's length, you’ll be able to cover both planets very easily with your pinky," Henry Throop, an astronomer with NASA, said.

Jupiter and Saturn aligned in the night sky over Kerala, India, on Monday, December 21. (Credit: Skp Vishaal via Storyful)

The planets will be visible to the naked eye when directed toward the southwest just after sunset, according to NASA. On Monday, they would appear so close that a pinkie finger at arm’s length would cover both planets in the sky, NASA said.

Stargazers can see the "Christmas star" on the evening of Dec. 21 on the same day as the winter solstice, which is when one of the Earth's poles has its maximum tilt away from the sun.

Storyful and Stephanie Weaver contributed to this report.