A Michigan college senior was unlikely to walk again after she fell in December. But in just a few months, with incredible determination, she went from barely able to move one foot to jumping and running.

Annie Bruce is a senior in college and studying to become a nurse. But she's spent the past eight months being nursed back to health by a team of medical experts after her life changed in an instant.

"I look like I am normal to people that don't know what happened to me," Annie said. "I remember thinking I was going to die and that I couldn't breathe."

It was December, a week before Christmas when Annie fell. She has a blood pressure condition that caused a fainting spell. Then she fell off the stairs and her head crashed into a ledge.

She had a broken bone in her neck and would need surgery right away to relieve the pressure on her spinal cord.

"It's been injured right here and that's where her fracture was," Dr. Park said while pointing out a white area on the x-ray that shows bruising on the spinal cord.

That can cause permanent damage so Dr. Park fused Annie's spine to relieve pressure on the spinal cord with plates and screws. But the bruising meant an uncertain future for Annie.

"I could move my left leg ever so slightly but that was the only movement I had. I was kind of like, what is this - what's going on," Annie said.

But she's competitive and it wasn't long before that spirit got her moving. She stood for the first time on December 30th and was starting to walk with the help of the incredible team at the Rehabilitation Institute of Michigan (RIM).

By January 15th, she was starting to walk.

Annie says it was grueling work with hours of physical therapy and occupational therapy day after day.

"I feel like you don't have a choice in that instance: you stay paralyzed or you get up and you try to get better," Annie said.

And she did. She ended up rocking out of RIM and into an outpatient treatment program at Shirley Ryan in Chicago.

By April, she was trying to run.

In May, she was jumping rope.

And by August, she was able to jump straight up onto a table.

"I thought maybe she would be able to stand and maybe just go to the bathroom with a walker or hopefully just kind of do short distances. I didn't imagine her being able to run and do the things that she's doing now," Dr. Park said. "Stories like this is what makes us want to be physicians."

The story inspires Dr. Park but it also inspires Annie who interned on the pediatric floor at Shirley Ryan.

"I think that I was really able to have an impact with the kids - especially the spinal cord injuries and the parents," she said. "It gets really lonely when you don't have anyone to talk to that knows what you're talking about."

Annie is still recovering and in therapy but the experience has given her new insight into the very real struggles for so many living with disabilities.

"I'm going to ride the redline in Chicago and I have trouble with the stairs and I'm like how is someone with a wheelchair suppose to get down here?" she said.

Annie admits the injury, uncertainty, and recovery is all physically and emotionally exhausting.

"People are scared to talk about their mental health but an injury such as this takes such a toll on you and you can't not talk about what you've been through. It's traumatizing," Annie said.

That's why she wants people who are going through something similar to focus on their mental health, too.

"If people can have bad hours instead of bad days, that will help them get through it. I mean, you choose to fight the battles that you want to fight," Annie said.

Across the country, 20,000 Americans experience a spinal cord injury each year with car accidents the number one cause. The second is falls. Of those 20,000, only one percent fully recover.

Annie says everyone needs our support.

"I think that's what a lot of people with injuries like mine need to hear. They need to hear that someone's proud of them," Annie said.

Annie knows she wouldn't be where she is without her family and all of the doctors, nurses, and physical and occupational therapists. This fall, she's returning to Marquette University to become a nurse and plans to keep making them proud.

"I'm grateful for my experience and I get to take that back into my nursing practice, which I don't think a lot of nurses have that experience. I hope that in the future I'm able to help people more than I could have if this didn't happen," Annie said.

She said she's so grateful to all of the medical professionals who helped make her recovery possible. 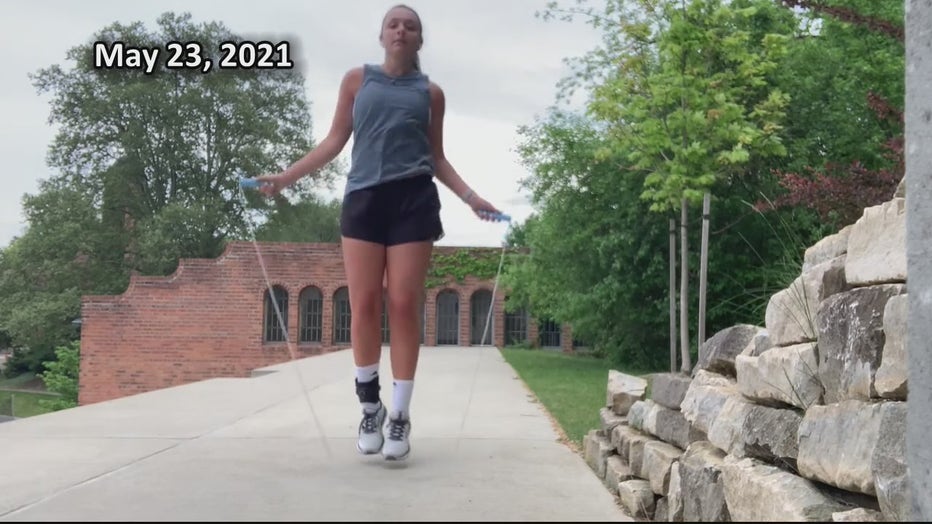