DETROIT (FOX 2) - A man is accused of shining a laser at a Detroit police helicopter, temporarily blinding the pilots, at a protest last year, according to court documents unsealed this week.

The federal documents allege that Michael Sam Hurd was attending a Detroit Will Breathe protest when he shined a laser at a helicopter that was watching the crowd on Woodward Avenue in Downtown Detroit at 12:30 a.m. August 23, 2020.

The court documents claim that the light blinded the flight crew momentarily.

A camera on the helicopter was used to pinpoint a location and camera footage from multiple businesses from Rock  Security Company showed the area where the laser originated from. 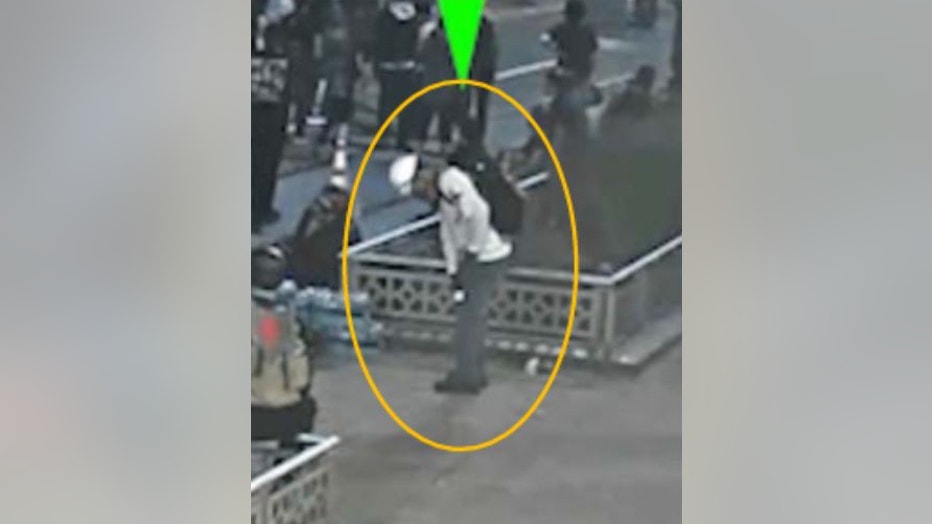 Authorities allege that this shows Michael Hurd the night a laser was pointed at a police helicopter. (Photo: U.S. District Court)

Footage showed Hurd in the area. According to the documents, he reached for something before a bright light and green haze was seen.

The court documents state that "Hurd's actions and the light observed from his hands appears consistent with shining a light beam and with using a reflective surface (such as a mirror) to manipulate and direct the light beam."

Hurd is accused of looking at the helicopter and holding the object toward it for several seconds.

Just before 1 a.m., Hurd was seen reaching toward a person police were interacting with as they tried to disperse the crowd, documents said. An officer allegedly removed Hurd's backpack and dropped it. A physical struggle ensued and he was knocked to the ground.

Hurd was arrested but was released when he arrived at the Detroit Detention Center because a defense lawyer was paying for the bonds of anyone who could provide ID. Hurd showed U.S. Army Health card and was let go, but was ticketed.

The post accompanying the photo read: "Oh hey I  finally found a  decent pic of me before being rolled over by the bullies in badges. I  was taken down with trans allies and had to watch them punch one of them over and over while they sat on me."

According to court documents, a search warrant was executed at Hurd's home on November 19, 2020, and he was interviewed. He allegedly told authorities he had a laser with him that night, but police confiscated it. Video footage showed that the laser may have actually fallen and rolled away during the scuffle with officers.