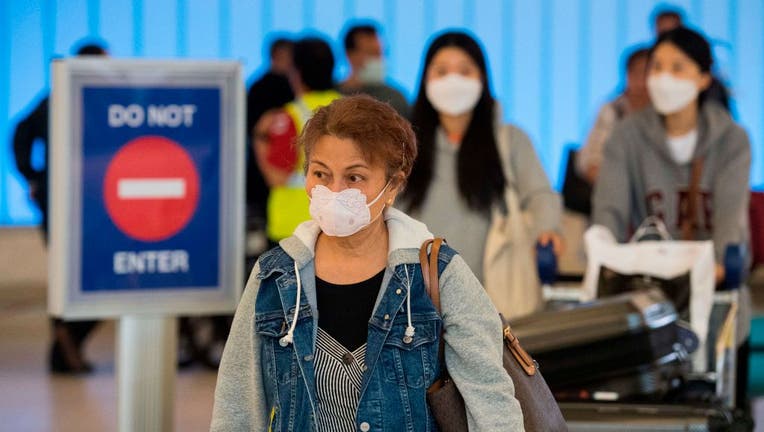 Passengers wear face masks to protect against the spread of the COVID-19, coronavirus, as they arrive at LAX airport in Los Angeles, California on Feb. 29, 2020. (Photo by MARK RALSTON/AFP via Getty Images)

SEOUL, South Korea - The death toll from the coronavirus in the U.S. climbed to six Monday and the disease spread to ever more countries and world capitals, even as new cases in China dropped to their lowest level in six weeks.

A shift in the crisis appeared to be taking shape, as hundreds of patients were released from hospitals at the epicenter of the outbreak in China and the World Health Organization reported that nine times more cases were reported outside the country than inside it over the past 24 hours.

At the same time, the virus popped up for the first time in New York, Moscow and Berlin, and clusters of the disease surged around the world. In the U.S., health officials announced four more people died, bringing the total to six, all in Washington state, where researchers said the virus may have been circulating undetected for weeks.

The global death toll pushed past 3,000, and the number of people infected topped 89,000, with fast-expanding outbreaks in South Korea, Italy and Iran.

Dr. Mike Ryan said that because COVID-19 is not as easily transmitted as the flu, “it offers us a glimmer ... that this virus can be suppressed and contained.”

Coronavirus: Symptoms, testing and how to prepare amid growing COVID-19 outbreak

Around the world, the virus reshaped people's routines, both at home and at work, from the millions of Japanese schoolchildren facing four weeks without class to special voting booths for Israelis under quarantine. Mobile hospitals were planned in Iran, and the “Mona Lisa” hung in a vacant room of the shuttered Louvre in Paris.

The Organization for Economic Cooperation and Development warned that the world economy could contract this quarter for the first time since the international financial crisis more than a decade ago.

Wall Street nonetheless opened higher after the worst week for stocks since the 2008 crisis.

In the United States, the number of cases climbed to at least 91, and the country recorded its sixth death, all of them in Washington state.

In densely populated New York City, a health care worker who had returned from Iran was in quarantine at home, according to New York Gov. Andrew Cuomo. He said the city is ramping up preparations and cautioned against panic. The virus has reached at least 10 states, according to the U.S. Centers for Disease Control and Prevention.

“The fear, in my opinion, is outpacing reason at this point,” Cuomo told “CBS This Morning.”

Four Americans who were quarantined in Nebraska after being exposed on the Diamond Princess cruise ship in Japan were released. “My only question is, will my friends shun me after this?” said one of the, Joanne Kirkland.

Malaysia, Tunisia, Senegal, Jordan and Portugal were among the newest places to detect the virus. More than 60 countries, including nine of the 10 most populous, have reported infections.

Even as alarms grew louder in much of the world, positive signs emerged from China, where the outbreak started two months ago. China reported 202 new cases, its lowest daily count since Jan. 21, and the city at the heart of the crisis, Wuhan, said 2,570 patients were released.

At the largest of 16 temporary hospitals that were rapidly built in Wuhan in response to the outbreak, worries over the availability of supplies and protective gear eased, along with the pressure on the medical staff.

RELATED: Does wearing a face mask protect you from coronavirus and other infectious diseases?

The surgical masks that most people buy in response to epidemic outbreaks are not designed to seal around the mouth and nose, which means airborne germs can still come in through the sides and top.

Dr. Zhang Junjian, who leads a temporary hospital in Wuhan with a staff of 1,260, said optimism is high that the facility will no longer be needed in the coming weeks.

“If nothing special happens, I expect the operation of our makeshift hospital ... could complete its historical mission by the end of March,” Zhang said.

But in other places, problems continued to multiply.

“Just about everywhere, the cases are rising quite quickly in a number of countries,” said Ian Mackey, who studies viruses at the University of Queensland in Australia.

South Korea, with the worst outbreak outside of China, said it recorded 599 new cases Monday, bringing the total to 4,335. The death toll rose to 26. To cope, the country said hospitals will be reserved for patients with serious symptoms or preexisting conditions, with mild cases now routed to other designated facilities.

“If we continue to hospitalize mild patients amid the continued surge in infections, we would be risking overworking medical professionals and putting them at greater risk of infections,” said the country’s vice health minister, Kim Gang-lip.

South Korea extended the shutdown of its schools two more weeks to March 23. And the leader of a church that has blamed for being the source of the country’s largest cluster of infections bowed in apology.

RELATED: Coronavirus more contagious than SARS or MERS, can live on surfaces for up to 9 days, studies say

“We also did our best but weren’t able to contain it fully,” said Lee Man-hee, the 88-year-old leader of the Shincheonji church, which some mainstream Christian groups reject as a cult.

In the Middle East, a worsening situation in Iran was accompanied by concern for its top leaders after a member of the council that advises the Islamic Republic's supreme leader died of COVID-19. Iran has confirmed 1,501 cases and 66 deaths, but many believe the true number is larger. Its caseload surged more than 250% in just 24 hours.

Major Shiite shrines in Iran remain open despite civilian authorities’ calls to close them. The holy cities of Mashad and Qom, where Shiites often touch and kiss shrines in a show of faith, have had high numbers of infections. The Revolutionary Guard said it will install some mobile hospitals in response, and authorities have been cleaning the shrines and spraying down streets with disinfectant.

“We will have two difficult weeks ahead,” said Ali Raibiei, a spokesman for the Iranian government.

In Europe, leaders braced for worsening caseloads after the count surged in France, Italy and to a lesser degree Spain over the weekend. Italy’s infections ballooned 50% in 24 hours to 1,694. Health officials in northern Italy sought to bring doctors out of retirement and accelerate nursing students' graduations to help an overwhelmed public health system.

RELATED: As the deadly coronavirus continues to spread, at what point does it become a pandemic?

The Louvre, the world’s most popular museum, remained closed as its 2,300 workers expressed fears of contracting the virus from visitors arriving from all over the world. At Fashion Week in Paris, attendees greeted each other with elbow touches instead of kisses. In Germany, Chancellor Angela Merkel’s outstretched hand was rebuffed by her interior minister at a meeting.

Japan closed schools for most of the country's 12.7 million children until the end of the month, creating difficulties for some families.

Mika Nakajima, a museum employee and single mother with a 15-year-old autistic son, said she has already used up her paid vacation days to take care of her aging parents and her son and fears losing her job.

“It's a difficult time for families with ordinary children, but it's much harder for those who have children with disabilities or who need attention and care,” Nakajima said. “Some other forms of support are needed.”