LANSING, Mich. (FOX 2) - Four days after testifying in front of Michigan's House Oversight Committee, Rudy Giuliani, president Donald Trump's personal attorney, has been hospitalized with COVID-19. Now the Ingham County Health Department says anyone who did not wear a mask during the hearing and anyone who came within six feet of him must quarantine.

The health department says it's extremely likely Giuliani was contagious when he brought witnesses to testify to alleged voter fraud at the TCF Center in Detroit.

Mandatory quarantine now required for many after Giuliani hearing in Lansing

The Ingham County Health says anyone who did not wear a mask during the Rudy Giuliani hearing and anyone who came within six feet of him must quarantine.

“Unfortunately, Mayor Giuliani has been hospitalized with COVID-19. His hospitalization comes only days after being in a confined conference room in Lansing for several hours without a mask,” said Ingham County Health Officer Linda S. Vail. “Adding to my concern is that many attendees were also unmasked. This is the highest level of risk. Those who were present without a mask and those who were within 6 feet of Mayor Giuliani must quarantine for the safety of others. I wish Mayor Giuliani a full and speedy recovery.”

"Not only was that hearing a danger to our democracy but it was a threat to our health," said Democratic State Rep. Darrin Camilleri. He says he wore a mask but that Giuliani and many others didn't during the four-hour testimony.

"It really proved to be true the likelihood of how fast COVID can spread. For me, I was scared, I was nervous. Nervous not just for myself but for the health of people I work with but for everybody who is potentially in contact with Rudy Giuliani," Camilleri said.

House speaker Lee Chatfield says Giuliani reported he was negative during his visit.

A statement from Chatfield reads in part, "Even if mayor Giuliani was COVID-positive while in Michigan, legislators, staff and members of the audience in the committee room were far more than six feet away from him. The only people within six feet for an extended period of time in the committee room were his own legal team and witnesses who traveled with him. Under those circumstances, the CDC does not recommend quarantine for other individuals." 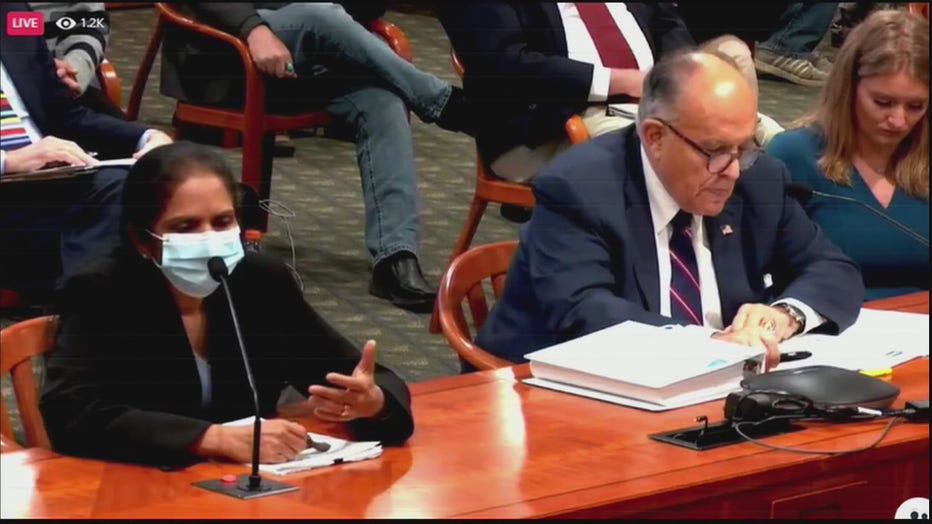 Meanwhile, Camilleri says leaders in Lansing haven't taken the pandemic seriously from the beginning. He says they could mandate masks and do more regular testing but right now they don't.

"This was the clearest example of how little they’ve been taking this COVID-19 pandemic seriously and this just really showcased all of it in one event," Camilleri said.

FOX 2 reached out to every Republican on the House Oversight Committee. They either did not respond or declined an interview.

The House is back in session on Tuesday.