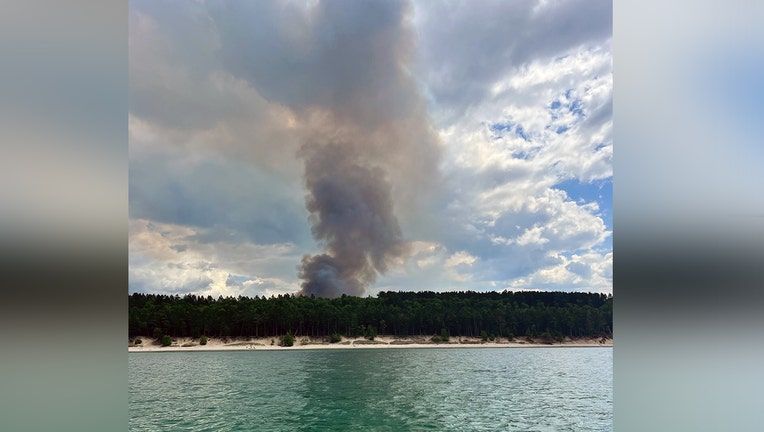 ALGER COUNTY, Mich. (FOX 2) - State firefighters say they have contained a wildfire that got within a mile of Pictured Rocks National Lakeshore in northern Michigan this week.

Crews from local fire departments and the Michigan Department of Natural Resources have been working to get the blaze under control since Sunday. It's torched about 46 acres of wildlife in Alger County, which is in the upper peninsula of Michigan.

The fire was first discovered when a large plume of smoke was spotted near Twelvemile Beach Campground, which is on the eastern end of the national lakeshore. A cause has yet to be determined.

"With a fire of this size it can take many days of continued effort to ensure the fire stays contained and is no longer is a threat," said Chief Ranger Joe Hughes at Pictured Rocks National Lakeshore. "Thank you to the DNR firefighters who are continuing to work the area throughout this week."

Fire suppression efforts have kept lakeshore safe for campers and park visitors. While it is no longer spreading, the fire is still burning underground in the duff layer, which is a layer of soil beneath the top that has stands of hemlock in it.

Fire crews from across the region, as well as members of the National Park Service have all been on hand to fight the fire.

"Despite rainfall in some areas, fire danger remains at a heightened level in many parts of the Upper Peninsula," said John Pepin, DNR deputy public information officer. "We remind everyone to be mindful and careful with any activities that might potentially spark a fire."

Pictured Rocks runs along the northern coast of the upper peninsula and Lake Superior and is one of the most popular in Michigan.