DETROIT (FOX 2) - The owner of the restaurant Marrow Detroit said they had their best month ever in February of 2020.

"And of course the next month everything collapsed," said the owner, Ping Ho.

Marrow had been open just over a year before the COVID-19 pandemic and shutdowns hit in March. Marrow Detroit is a butcher shop and restaurant hybrid on Kercheval near Van Dyke in the city's West Village, which is struggling.

"Not being able to have proper dining has really hurt the top line," she said.

Sales are down 50-percent and Ho has been forced to let go of more than half of her staff. And just as they began to set up for warm, outdoor dining with nine, large heat lamps, someone broke in Thanksgiving night.

Sales are down 50-percent and Ho has been forced to let go of more than half of her staff. And just as they began to set up for warm, outdoor dining with nine, large heat lamps, someone broke in Thanksgiving night. The thief entered through the patio door which is now chained shut but stole half a dozen heat lamps and propane tanks.

"I assume he had a big truck, and the person didn't manage to take all of them, but the majority of them,"  she said.

Losing six out of nine lamps was crushing for the business. New replacement lamps cost about $300 each. Ho is trying to keep the restaurant patio open and says, she quickly tried to replace them.

"Since the pandemic started, and the moment the weather started getting chilly, the prices shot up," she said.

Looking online and all over social media to find used ones, she was able to buy a couple more for twice the price.

"We had some kind friends who drove all the way to Plymouth to hunt down some extra ones they found on Facebook marketplace. For over $200 a pop."

Ho says after updating customers on social media - she encouraged them to buy gift cards and gifts from their butcher shop. Marrow Detroit then - hitting a record in gift card sales over the weekend. 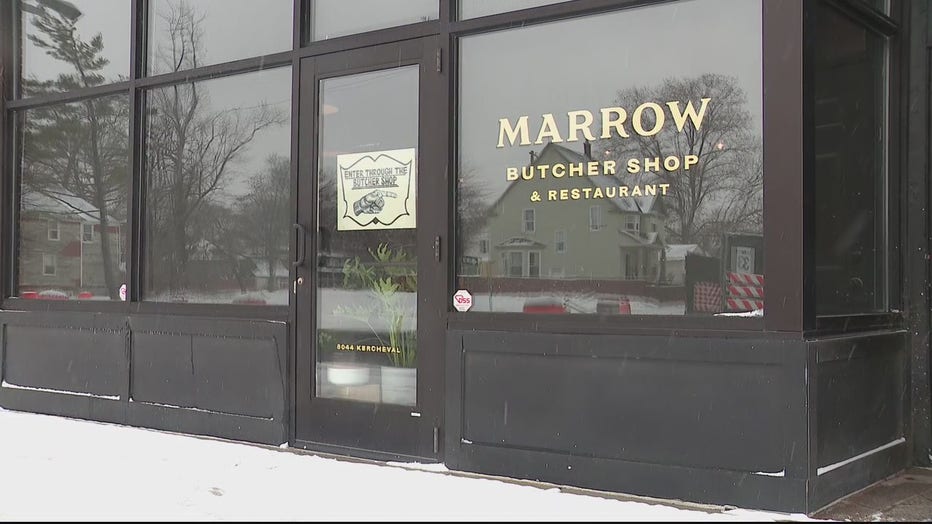 "We are very thankful for our customers," she said. "It was very disheartening. To be hit in that way when we're already struggling, however with the outpouring of support from the community I think that really made up for things."

Detroit police are reviewing the surveillance video and searching for the man who apparently had a hunger for those heat lamps. Ho says - she plans to have the patio - back open and - toasty warm on Thursday.

"The person who did it to us was probably desperate and we hope that he's using the money to feed his family or pass it on to buy gifts for his kids," she said. "Something positive."