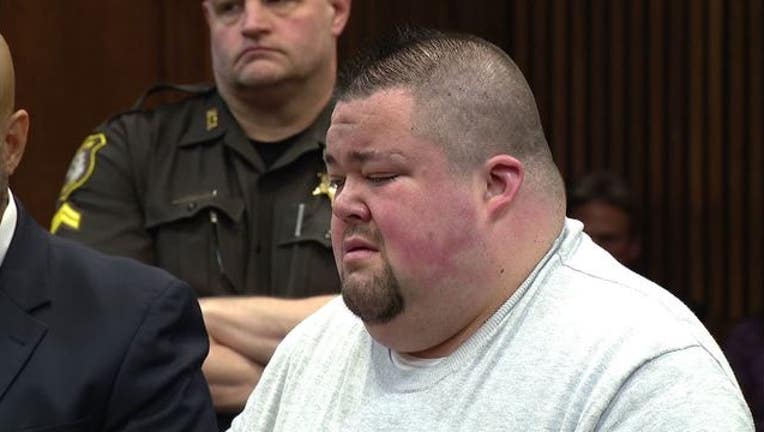 DEARBORN, Mich. (FOX 2) - Timothy Eubanks, a once-licensed gun owner, was spared jail time and ordered two years of probation and must start a program to educate people on gun safety.

Eubanks pleaded guilty last summer to six charges of second degree child abuse for the shooting of two toddlers who were inside his home, which was operating as an unlicensed daycare, in 2017.

Timothy and his wife, Samantha, were accused of running an unlicensed daycare from their home and would watch children for friends and family during the day.

In September 2017, the Eubanks' 3-year-old son found a gun inside the home and shot two other toddlers. A 3-year-old boy in the face and another 3-year-old boy were both hit in the shoulder.

During Friday's sentencing, the mothers of both victims talked about what their sons, now 5 and 4, are having to face. One of the mother's, who FOX 2 is not identifying, said her son still talks about it.

"There are somethings in your life that you will never unsee. My 3 year old lying in a hospital bed with bandages and blood on his shoulders is one of those things. In the days that followed the incident, my son would tell us what happened, very matter of factly: mommy, my friend shot me and he shot my friend. it wasn't very nice."

She also said when they even get in the same area as the home, he asks to stay away from the house with the red door.

The bullet that passed through the boy's shoulder hit the other boy in the face. The bullet entered just above his left eye and exited out the back of his skull. He lost his eye and has had several reconstructive surgeries already.

That boy's mother said he wakes up screaming.

"Constantly wakes up with night terrors, he's on sleeping medications and more for PTSD. He's struggled a lot," she said. "He wakes up in the middle of the night and is just screaming. He's not awake but he'll just scream."

Whens he first saw her son, the prognosis wasn't good.

"They didn't think he was going to make it when I arrived at the hospital. They told me the bullet entered the front his head and out the back of the head and that I should say goodbye."

But he did make it and he's now facing years of surgeries, including one in March.

Timothy could have spent several years in prison but was spared prison time. Judge Cynthia Hathaway said she wanted him in public to inform people about household gun safety.

"And let me tell you, I have a strong suspicion that you, like millions of other people in this country, were thinking that having guns in your home was a way of protecting your family. And isn't it ironic that while you were trying to protect your family, you end up with your family hurt, another family hurt, and a community hurt. It's just ironic, that people think that having guns, even in their home, is a way to protect themselves and their families. The answer to that question is still out there. We're still grappling with it, trying to figure out what to do."

Timothy Eubanks was extremely remorseful in court and Judge Hathaway said she believed that he is owning his mistake and will regret it for the rest of his life.

In his campaign to raise awareness, he's also ordered to encourage people to take a home firearm safety course.

"There are those courses all over this country. I need you, and this community needs you, to get the word out that if they haven't already taken the home firearm safety course, that they strongly do it and you tell them the reasons why," said Hathaway. "You can't do it in jail, so I'm not going to sentenced to jail. I'm going to place you on probation as recommended by the probation department for two years."

Timothy was credited for one day of jail time and has not been ordered to pay restitution as the families are both taking him to civil court.