Biden has been at the top of the crowded field for months but is having to answer persistent questions about his 49-year-old son, Hunter's business dealings in Ukraine and China.

WESTERVILLE, Ohio - Joe Biden defended his son against President Donald Trump's criticism at Tuesday night's Democratic presidential debate, contending Trump is going after the son because he fears facing the former vice president who would "beat him like a drum."

Biden has been at the top of the crowded field for months but is having to answer persistent questions about his 49-year-old son, Hunter's business dealings in Ukraine and China.

Massachusetts Sen. Elizabeth Warren has climbed to co-front runner, but she ducked questions again about whether middle class taxes will go up to pay for the "Medicare for All" health care plan she backs. She declined to answer yes or no, insisting instead that families will see overall health costs decrease as their premiums fall.

Eyes and ears were also on Vermont Sen. Bernie Sanders who was out to prove he has the stamina for hours on stage, less than two weeks after a heart attack forced him to temporarily suspend campaigning.

Hosted by CNN and The New York Times, the field's fourth round of debates came as the impeachment inquiry against Trump has grabbed most of the nation's political attention and left the Democratic race for the White House somewhat overshadowed. 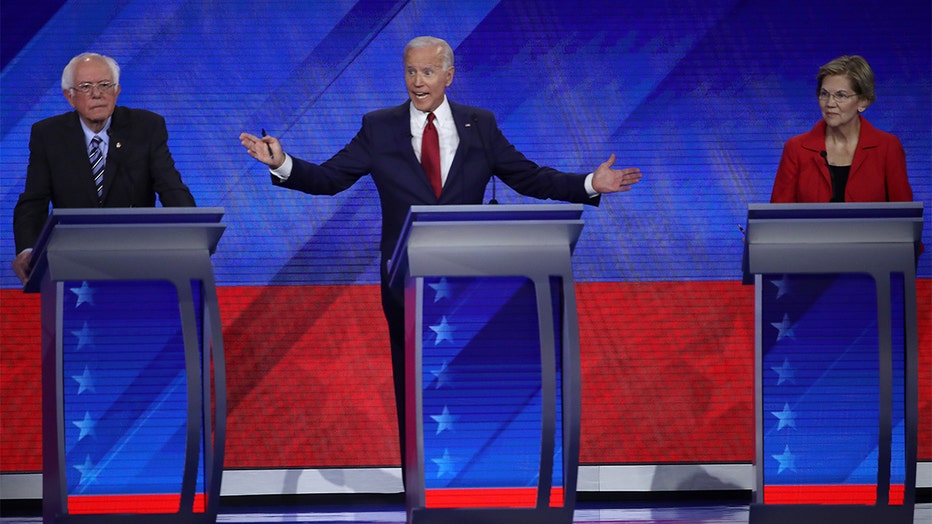 It took place on the campus of Otterbein University, just outside Columbus in Ohio, one of the nation's toughest electoral battlegrounds, but also a state that has long helped decide presidential elections but has drifted away from Democrats in recent years.

Without providing evidence, Trump has repeatedly said that Biden's son improperly profited from work in Ukraine and China while the elder Biden was vice president. The president also insists that Biden used his office to protect his son from allegations of wrongdoing.

Biden's Democratic rivals have united in criticizing Trump, but the 76-year-old former vice president himself is facing pressure to provide explanations.

So is Warren, 70, who, in addition to health care, is also facing questions from opponents about if she was actually forced from her teaching job because of a pregnancy nearly a half century ago, a claim that has become a core part of her personal message. Critics have pointed to past speeches and documents that suggest she left on her own. Warren is standing by her story.

The 78-year-old Sanders, meanwhile, spent most of the last two week recuperating in Vermont after doctors inserted two stents put in to clear a clogged artery. He's planning to use the debate to show he's fully recovered before formally rejoin the race with a rally in New York on Saturday.