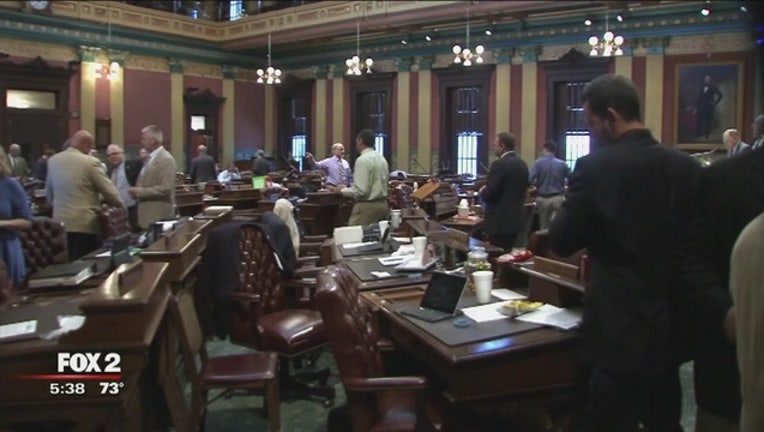 (WJBK) - It was the day after the night before and ironically Detroit charter school students were touring the state capitol while legislative Democrats continued to tee-off on legislative Republicans.

"The bill is not a good bill.  It's a piece of crap," suggested Morris Hood, Jr.

"It wastes $617 million trying to throw money at the problem without long term reforms," was the post vote analysis from the House Democratic leader Rep. Tim Greimel.

Senator David Knezek chimed in with, "This is not going to pay -off the debt.  It's not going to avoid bankruptcy.  This is simply a stay of execution."

Rep.Tim Kelly (R-Saginaw) has heard all the negative rhetoric and is amazed reflecting that the "pessimistic story line is sad an pathetic."

Sen. Bert Johnson joins the chorus of criticism suggesting Detroit school parents will vote with their feet.  "Parents who have been hearing about this crisis for the last six to eight months, are finally of the mind that they need to remove their children from the district so there will be a net loss, another population drop."

And Senator Knezek argues the GOP strategy was "designed to set up the district for failure."

To which Republican Mr.Kelly counters, "we've given them not only a life-line but a boost for the future of DPS."  As for the bankruptcy notion, he adds, "that is the pessimism I can't understand.  It's amazing to me."

Yet Democratic leader Greimel looks into the future and concludes,"In the longterm it does not eliminate the deficit minus the needed reforms.  We're going to see the

Senator Hood argues the GOP plan is dictatorial.  "It is a dictatorship because you don't allow us to be in the process to form the legislation we were voting on.  Everyone in the room had input" except Detroit lawmakers.