Detroit Police Officer off streets after punching man in Greektown

A Detroit Police Officer who punched a man in Greektown in a video shared this weekend online has been pulled off the streets as police investigate what happened.

DETROIT (FOX 2) - Interim Detroit Police Chief James White certainly has had his hands full this summer, especially in Greektown where yet another wild brawl was captured on video. This time, however, it ended with a man being punched in the face by a Detroit Police Officer as he backed away on Saturday night.

The video, posted on Reddit this weekend, shows the man walking backward as two police officers are giving him commands. Then the punch knocks him out.

"Y'all ain't got to do that dog!" yells somebody as the man falls down.

The man who was punched doesn't appear to react when officers try to lift him up. He eventually wakes up and begins shaking his hand at the police. Pedestrians then help him up as officers leave the scene.

"I have some serious concerns as to how that was handled. We've come to expect our officers to deescalate situations. I did not see de-escalation there, I didn’t see our training there," White said. "If there is a violation, we are going to hold the officers accountable and we are going to be transparent about it to the community."

Officers had been trying to get the man away from a separate brawl. When he wouldn't, it escalated and it eventually ended with him being laid out by the officer.

The man trying to break up a fight that involved two brothers and a cousin at closing time. But so were the Detroit Police Officers.

One 22-year-old Detroit who remained anonymous had a sprained ankle after the wild brawl. He said he wasn't fighting back when the police started hitting him.

"I just started getting kicks and knees to the head. All that. Punches everything," he said.

The 22-year-old said they didn't deserve the takedown from officers.

"We may have been talking a little trash to them but other than that we (were) having a good time," he said.

White said the officer involved has been pulled off the street and is on desk duty during the investigation. 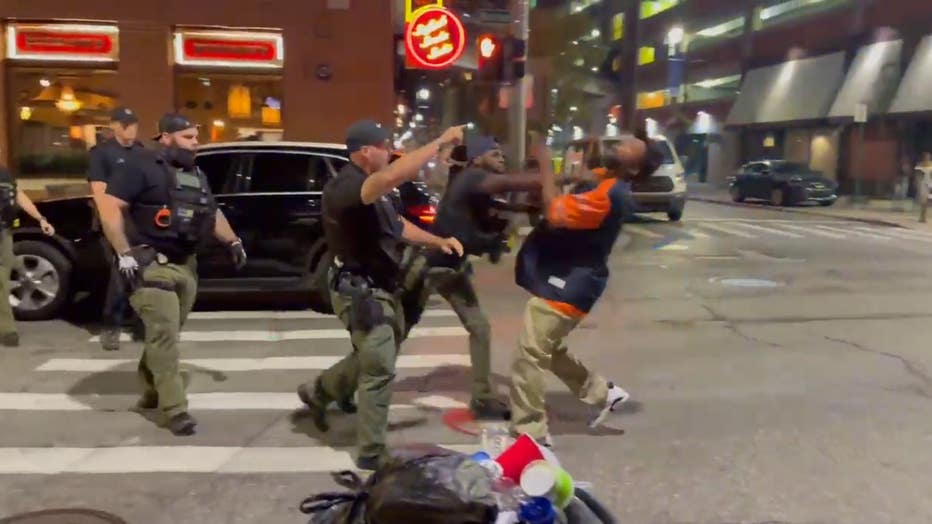