Detroit Mayor Mike Duggan said Monday morning that the city's COVID-19 deaths are dropping faster than any other city in the country but cautions "we still have a ways to go".

Mayor Mike Duggan posted a screenshot of Friday's numbers, showing fewer than 20 deaths had been reported for the week leading into Friday. Duggan captured the screenshot with information that the city's COVID-19 death rate is falling faster than most cities and credited Detroiters for being on guard and listening to advice from the city and health officials.

Duggan and Chief Public Health Officer Denise Fair hold a press briefing every day at 2 p.m. FOX 2 Detroit will stream it at fox2detroit.com/live

"Our COVID-19 deaths are dropping faster than almost any (other) city in the country. We still have a ways to go, but these numbers are a promising indication that testing and social distancing works. We could not do this without our dedicated teams and vigilant Detroiters."

The latest numbers on the city's website indicate even fewer numbers of cases in the past few days but the city cautions that data is subject to change is likely incomplete.

Southeast Michigan, particularly Detroit and Wayne County, are the epicenter of the COVID-19 cases in Michigan with Wayne, Oakland, and Macomb Counties accounting for 30,572 of the state's 43,754 confirmed cases. The three counties also have 3,278 deaths of the state's 4,049 deaths. 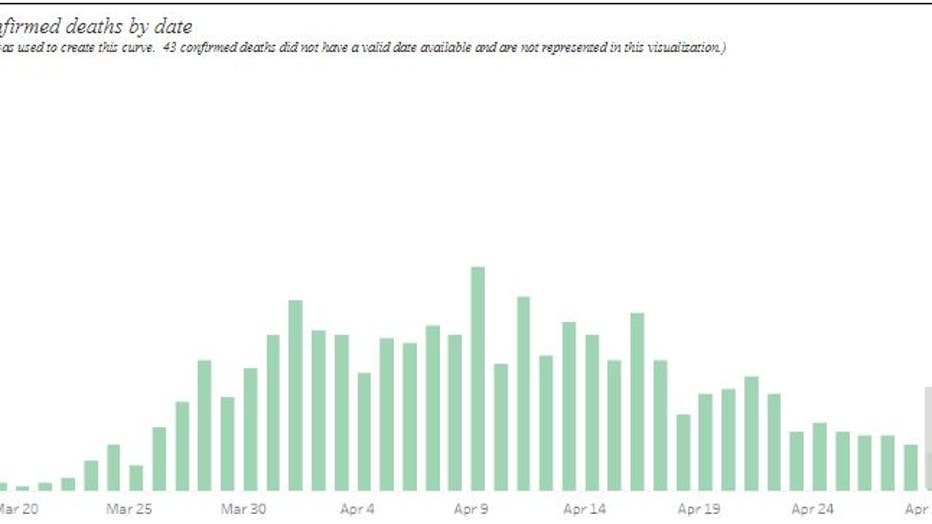 Duggan's statement on Monday is similar to one he made last Monday, saying that deaths in Michigan are trending down as hospitals are starting to win the fight with more vacant beds and ventilators that are no longer being used.

Last week, Duggan announced some employees would be returning to work, with proper testing, on Monday.

“These are the folks who cut the grass in the parks, cut the medians, maintain the grass at the police precincts, and really throughout the city,” he said.

They had always been permitted to return to work under the governor’s stay-at-home order to perform public service, but Duggan elected not to bring them back until they had the highest standards of safety outlined, he said.

“Their health is going to be the overriding concern,” Duggan said.