An electric fence did Detroit Fire no favors Tuesday after a vacant house fire jumped to the impound yard next door.

DETROIT (FOX 2) - Detroit firefighters spent most of Tuesday night battling two fires at the corner of Van Dyke and Lynch on the city's east side - one blaze at a vacant house and the other at vehicle impound lot.

A firefighter was also taken to the hospital in the course trying to put the fire out. He suffered smoke inhalation and heat exhaustion, but is expected to be released tonight.

The fire began at the house, then jumped next door to the lot, where it spread to some of the vehicles inside. By 9 p.m. the fires were out. A house, RV and about 15 cars inside the private lot burned.

"When I got over here, I noticed the auto yard was on fire but there were no firefighters over here," said witness Eric Powell. "So I went around the corner and told them what happened and they came around here."

Firefighters couldn't get access to the impound yard due to an electric fence that stretches the length the lot.

"They got a key box over there and (the firefighters) can’t get in there with the code," Powell said. "I tried calling the yard, but I couldn’t get anyone to answer the phone."

DTE Energy crews were also on site to try and find a way in, but DFD had to make due with the fight from above.

"We have extinguished several vehicles here at this time," said Allen.

While it wasnt the ideal way to fight this fire, the scenario could have been much worse.

"There's no exposures, no individuals (inside) so we are just going to let it burn," Allen said. 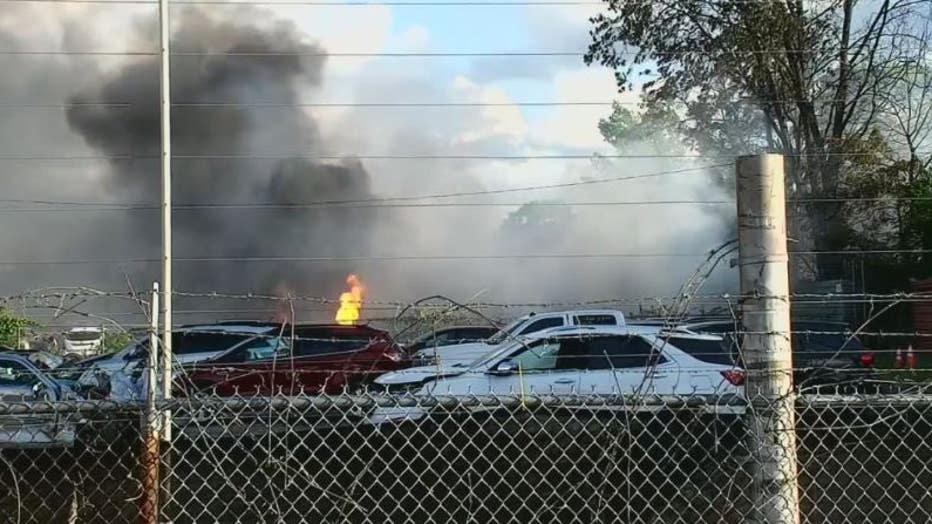