(FOX 2) - A company that makes devices used to monitor an athlete’s performance has pivoted to using the devices to track social distancing to help sports leagues stop the spread of the virus.

These days -- in the midst of a pandemic -- keeping your distance is more important than ever.

Kinexon created the SafeTag, a wearable device that beeps if you get within six feet of someone else. It's being used at a number of workplaces, including the NFL and by the Detroit Lions.

“You do spend a lot more time in close contact with people than you may think,” said Matt Bontorin.

Michigan State graduate Matt Bontorin works in communications for German-based Kinexon at their U.S. headquarters in Chicago. The company creates devices that are used by manufacturing companies to track assets, and on the sports side -- helps athletes monitor their performance, including things like their top speed or jump height.

When the COVID-19 pandemic began, Bontorin said they realized they could pivot the technology to help, designing a wearable tracking device to help people stay at least 6 feet apart. Now it’s being used by anything from office spaces to factories to national sports leagues, including the Detroit Lions.

The device is typically worn on your wrist or as a badge. If you get within 6 feet of someone else also wearing a device, a red light will flash -- that means step back. If you’re near each other for more than five seconds, an alarm will sound. The devices can be customized when it comes to distance apart and time allowed near one another. Then the device logs that interaction.

“It goes back into the system and if one of those two people does happen to test positive for the virus, it’s an easy way to digitally go back and contact trace,” Bontorin said.

On top of that - it records how long that interaction lasted. The duration matters.

“If you’re in contact with somebody for five seconds, versus 10 minutes -- you’re much more likely to have maybe passed along the virus to somebody,” he said.

Bontorin said the devices can provide a sense of security - if an infection occurs you know who may have been exposed very quickly.

“Because you know for a fact whether you’re within 6 feet of somebody. It’s always so hard to eyeball and tell,” he said.

Lions General Manager Bob Quinn says the entire league using the same device will take the guesswork out of making those hard decisions.

Employees can also be divided into tiers to limit interactions between people -- simply don’t need to interact at work.

“If you’re working in the office of an NFL team, for example, then maybe you shouldn’t be in contact with the star quarterback who is in a different zone. Our wearable will identify that and  the audible alarm will go off in a certain situation like that. But if you’re the star quarterback and you’re the center, well then, you do need to be in contact with one another, so the audible alarm will not go off in that situation,” Bontorin said. 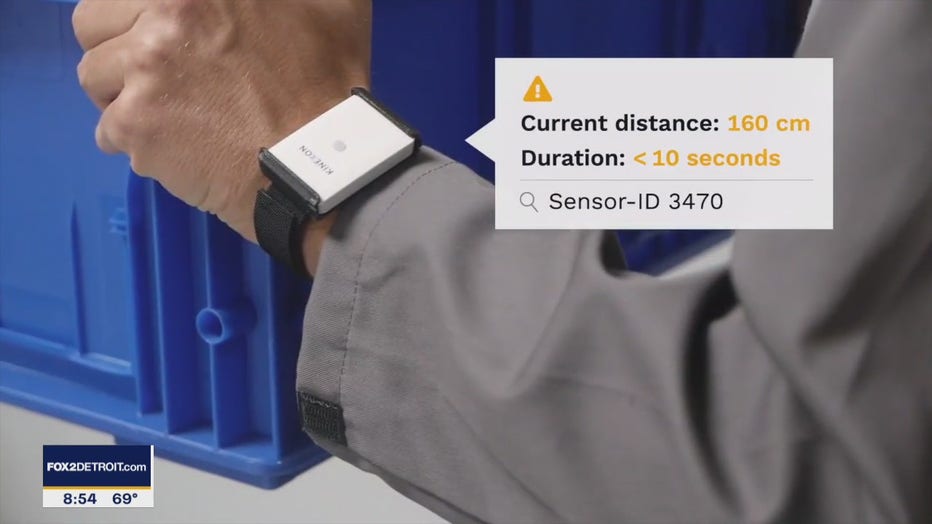 Quinn said that’s how the Lions are using it.

“The Tier 3 people are not in the everyday testing protocol so those people should not interact with Tier 1 and Tier 2 people,” he said.

KinexOn devices werw used by the Bundesliga soccer league in Germany, which successfully restarted and finished their season. Time will tell if the devices can in part help the NFL successfully complete a safe season here in the U.S.