DETROIT (FOX 2) - At the new Three Cats restaurant in Clawson, co-owner and Chef Matt Prentice is serving up the Cass Community arugula salad and the beet stack with Cass basil.

Prentice, a big fan of farm to table, says this is as close and as fresh as you can get.

Shipping container farm is as close to fresh as it gets

"It gets harvested two, three, four days a week. The arugula that I get from California -- I mean it's fine, but it's two weeks old before I get it. Here it's sometimes two hours old," he said.

That's because it comes from the Freight Farm at Cass Community Social Services in Detroit, where seeds are watered in trays then transferred to hangers, farming vertically inside a shipping container.

"So you can see everything's dated - what it is and when it was started so they'll know," said Faith Fowler, Cass Community Social Services. "It comes down almost like drip irrigation so that you're wasting very little water at all.

"This is a great solution to having fresh good food year-round."

Donated by the Ford Fund about a year ago, the Freight Farm is now producing fresh produce year-round for the soup kitchen at Cass and at Three Cats.

"It means his restaurant is able to have farm to table, table to farm in a really good way and to support the work we're doing here, with hungry people and homeless people and others," said Rev. Faith Fowler with Cass Community Social Services.

Fowler runs Cass Community Social Services, where serving the homeless and getting them work and housing is also about health and the environment.

"It tastes really good and it is good for you," she said. "We're using solar for here and considerably less water so it ties in with sustainability which is a theme at Cass."

The farming being done inside the shipping container is the equivalent of almost two acres of land. 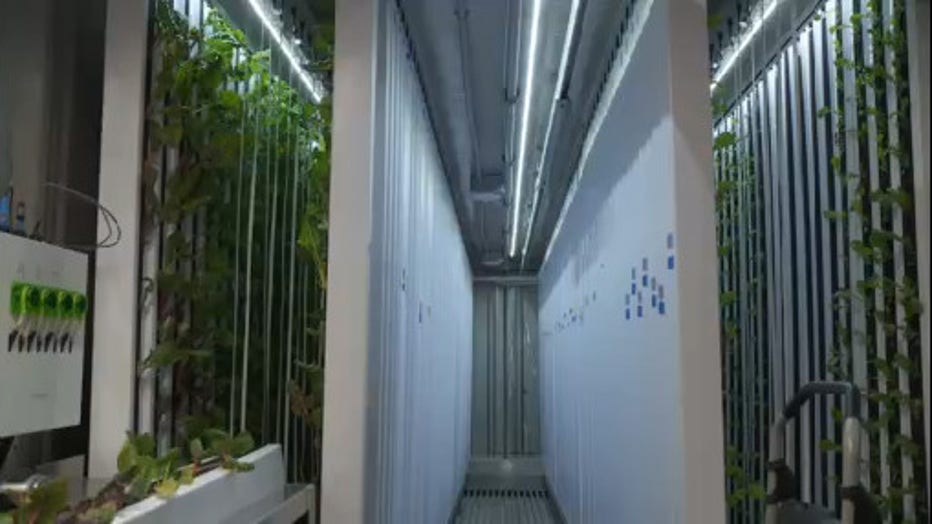 "It's a lot better product but it also gets the Cass name out there," said Prentice. "I mean, this little kitchen here feeds hundreds of thousands of people every year."

Prentice should know. As a longtime volunteer at Cass who then became the director of food services, serving up fresh produce to clients at the soup kitchen and customers here at Three Cats - it's about more than just good food.

"The bottom line is, the fresher the produce is, the better it is for you - it's just that simple," he said. "There's a lot of advantages to it but the biggest thing is just making people aware of what we're doing down here."