DETROIT (FOX 2) - With the new bridge to Canada being built, Delray residents are being offered a chance to house swap instead of being forced out.

Talk about a warm welcome to the Warrendale neighborhood of Detroit. The mayor, your city council rep, community leaders, a whole lot of important folks were there to say hey neighbor - and here's your newly refurbished house.

Twenty families so far have used the Bridging Neighborhoods program and are in their new houses.

FOX 2: "Que piensas sobre este casa?" (What do you think of this house?)

"Que esta muy bonita que me gusts mucho, muchas gracias," she said. (It's very pretty and I like it a lot. Thank you so much).

Think of this as a "deed swap." Maria Flores and Fabiola Piñon gave up their old home in the Del Ray neighborhood. The city takes that one - and gives them this home in a completely different part of the city.

Twenty families so far have used the Bridging Neighborhoods program and are in their new houses.

"Oh my goodness I love my house," said Maria Walkenback.

You might remember Maria who got a home through this same program. Plus, she got a little more than she bargained for.

What made all this possible? The Gordie Howe International Bridge costs $5.7 billion to build. About $42 million came from Canada to Detroit as part of that deal. And $32.6 million goes to the Bridging Neighborhoods program. 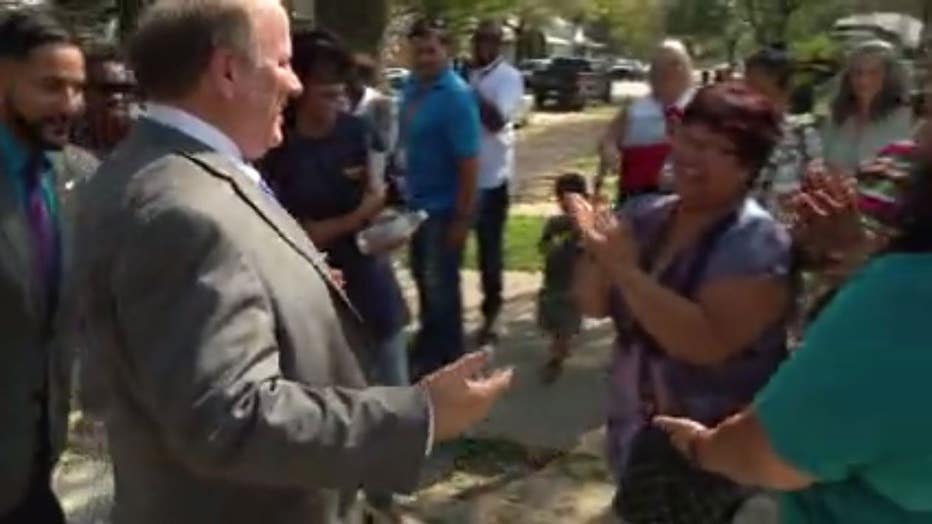 "Which was a very good deal and we pledged to use that, the priority being to move folks outside the bridge area who are going to be affected into other neighborhoods," Mayor Mike Duggan said. "I didn't want to just give them checks and have them move out of the city. So I said anybody who wants to move into a new neighborhood, do that."

With 20 houses renovated, 10 are under construction and 13 are in the pipeline to be built soon.

FOX 2: "And this helps revitalize the neighborhood."

"It really does, I am excited about them being here," said Veronica Armstead, the block captain on Brace Street. "I made sure to give them a newsletter and I hope to see more of this."