DETROIT (FOX 2) - The City of Detroit announced on Tuesday that it has received two-thirds of the amount of COVID-19 vaccines it was expecting when it started scheduling people over 75 to be vaccinated a week ago.

Mayor Mike Duggan said on Tuesday that the city has received about 6,000 COVID-19 vaccines - which is much shorter than expected but is not something the city can't overcome.

Detroit gets 3,000 fewer COVID vaccines than expected, switches to Moderna

The City of Detroit says its COVID-19 vaccine supply is lower than expected but are adjusting their scheduling and switching to Moderna.

Despite the shortage, the city will continue its vaccination program held at the garage at TCF Center and still has enough supply to vaccinate 1,000 people a day. However, the shortfall will mean the city has to make some changes.

"Those who are scheduled Wednesday, Thursday, Friday will get Moderna instead of Pfizer," Duggan said.

That's not all. Duggan said the city will move the schedule around a bit to make the supply last a bit longer.

"We’re going to push you back one week on the schedule. If you are getting your first shot tomorrow, January 20th, you would have gotten your second shot February 10th - that's what your schedule says - your second shot will be a week later, it will be Wednesday, February 17th," Duggan said.

The mayor said, despite the bumps in the road, the city has it under control as it moves forward.

Since the vaccination site opened last week, about 12,000 appointments have been set up and it includes 8,000 people over 70 or "good neighbors" who are 65 and over and driving those seniors to the site, thousands of teachers, and hundreds of postal workers and city of Detroit employees.

Despite that vaccine shortage, the city will now open up the process to federal and state law enforcement officials who live or work in Detroit and are not working from home. 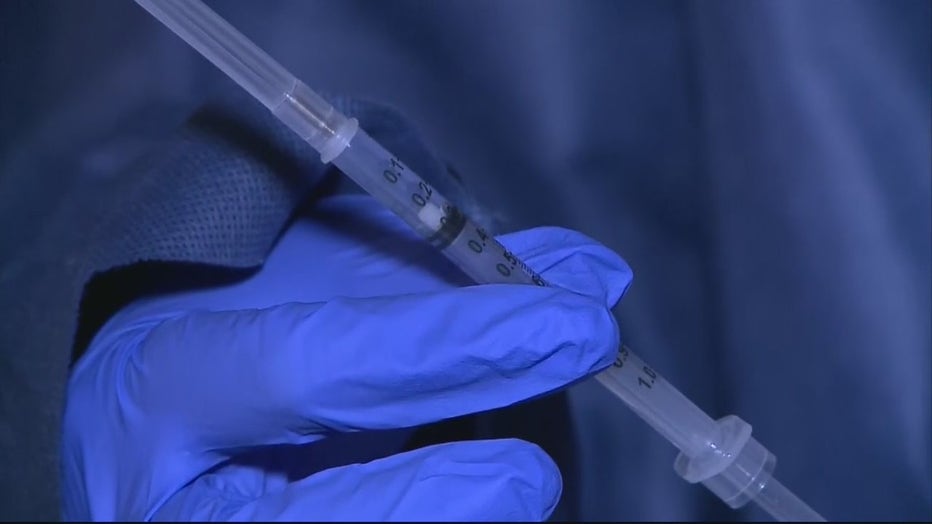 A COVID-19 vaccine is held by a worker at the TCF Center in Detroit.

"Just show your law enforcement badge when you show up," Duggan said.

The city is also working on its outreach to get an appointment by accommodating those who have a hearing challenge, are not fluent in English, or need help with transportation as the city doubles down on its goal of leading others on how to distribute the vaccines.

"We’re going to have a means in place to get you a ride to TCF Center," Duggan said. "We are going to lead the country in efficiencies on vaccinations."