Animation of the change in sea surface height tsunami propagation over 48 hours from the fiducial MOM6 model. Shown in m at ten-minute increments. Credit: From Range et al. in AGU Advances, 2022. Courtesy of the University of Michigan

ANN ARBOR, Mich. (FOX 2) - Sixty-six million years ago, an asteroid estimated to be miles wide collided with Earth's surface, causing destruction on a scale never before seen. Believed to be a mass extinction event that wiped out nearly all living dinosaurs and roughly three-quarters of plant life on Earth, it altered the planet's composition half a globe away.

Researchers at the University of Michigan for the first time have mapped what the resulting tsunami from the impact would have looked like, how big it got, and where it went.

It caused mile-high waves which scoured the ocean floor thousands of miles from the Yucatán Peninsula - where the crater from the asteroid remains.

"This tsunami was strong enough to disturb and erode sediments in ocean basins halfway around the globe, leaving either a gap in the sedimentary records or a jumble of older sediments," said lead author Molly Range, who conducted the modeling study at U-M. Paleoceanographer Brian Arbic and Ted Moore co-authored the study.

Previous studies estimate the asteroid was roughly 8.7 miles long and created a 62-mile-wide crater when it hit the Earth. The ensuing wave was potentially 2.8 miles high before subsiding.

According to the study which was published Oct. 4 in the journal of Advancing Earth and Space Science, the tsunami from the Cretaceous period was 30,000 times bigger than the tsunami that struck Indonesia in 2004 that left 230,000 people dead.

Recorded tsunamis that struck Japan in 2011 and after the Krakatoa volcanic eruption in 1883 barely register next to the waves that appeared millions of years ago.

"All these tsunamis, among the largest in recorded history, are dwarfed by the wave amplitudes and energy of the simulated Chicxulub tsunami," the study said. 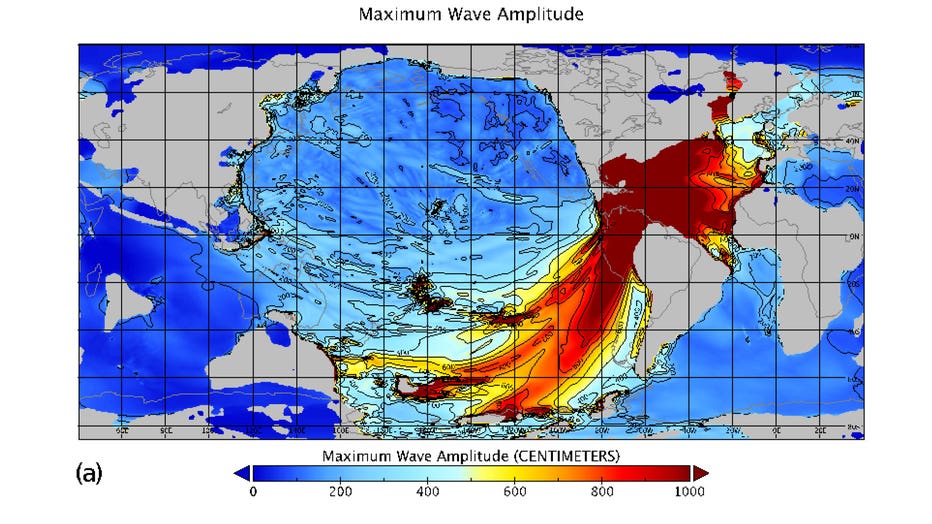 Simulations of the ensuing waves that rolled over the Earth also reveal just how differently the world looked 66 million years ago. The continent of Africa and South America are much closer while there is no Gulf of Mexico. A land bridge connects Asia to North America near the North Pole while a much larger water body separates it from the Australian continent.

It is in this foreign world that researchers assessed how a tsunami from the asteroid would have spread across the globe.

According to researchers, the tsunami traveled east and northeast into the North Atlantic Ocean, and southwest through Central America seaway - the gap that splits North America and South America.

While evidence of the tsunami is harder elsewhere, sediment deposits in New Zealand show that even across the globe, the impact from the asteroid was felt.