So often does law enforcement come across scared children when responding to calls that having a stash of comfy toys to console them could be just the treatment they need.

Approximately 850 stuffed animals were collected and donated to the Special Victim's Unit at the Detroit Police Department, to be given to children that officers spot in need.

"Parents or non-parents, you don't want children to be sad, you want to make it feel better. And if there's a terrible situation and just this little tiny thing can make it a little bit better, I think it's worth it," said Holly Hutton, an afternoon host on WYCD.

Multiply that 'tiny thing' by the hundreds, and you'll get the mountain of cuddly stuffed comfort that accumulated during Operation Bear Hug at DPD's headquarters on Thursday.

"Can you believe we actually lost count after awhile? But we've estimated, we've got 850 bears just in the matter of a few days which is amazing," said Hutton.

While the donors might already feel the joy of giving, they won't spark any more happiness until they find a new home - which often happens under much darker circumstances.

"As we come across children throughout our cases that we investigate or in our community outreach, we will have bears to pass along to them," said Captain Stacy Cavin of the Detroit Police Department. "Being the police, we can tend to be a little scary, but our goal is ultimately for children to feel safe."

Hutton might spend her days at work behind a microphone, but it's her husband's profession that sparked the idea. A member of the Detroit Police Department, she said he's witness firsthand the times when the toys could come in handy.

"You know, he comes home and a lot of times he doesn't talk a lot about what goes on in the city because it is really difficult, but there's been a couple of stories that have stuck out where your heart breaks," said Hutton

The toys were donated thanks to the generosity of several partners, including Petsmart. 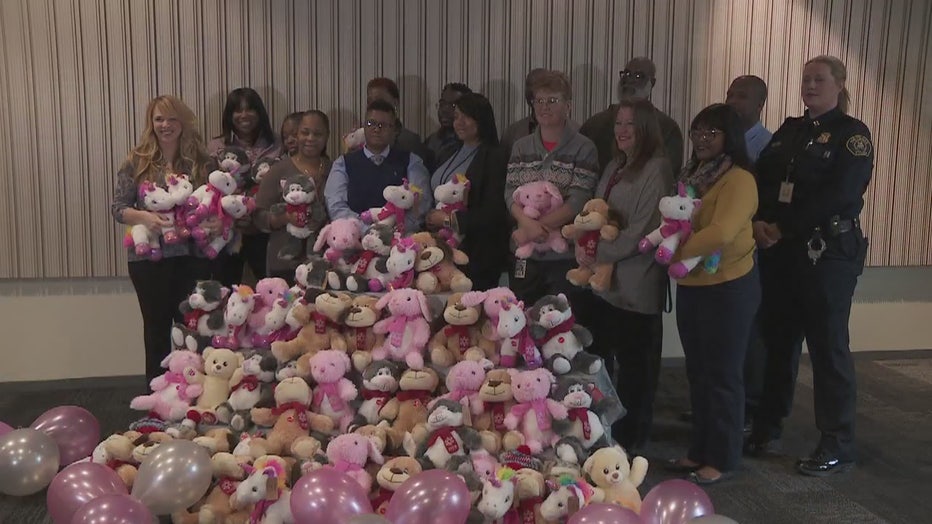 Even with the success, DPD hopes the donations spur on more charitable behavior. It doesn't have to come in the form of stuffed fluff either.

"We will always take donations if anybody else wants to donate any stuffed animals or anything for children, we always have children that can use things," said Cavin.

Donations can be made directly to the Detroit Public Safety Foundation.

"I really want people to realize that it doesn't take hundreds of dollars to make a difference, sometimes it is whatever you can do. It's a dollar, it's a $5, it's a teddy bear," said Hutton.