DETROIT - At least two suspects are in custody after Detroit Police recovered a bag that contained a high-powered rifle at the Greektown Casino Hotel on Tuesday.

In what Detroit Police are calling a possible narcotics case, officers arrested two of three suspects after the discovery in what Police Chief James Craig called a very concerning situation.

"Given that we didn't know if this was a terror threat or something less than that, the FBI was also notified, and so the FBI, the hotel (staff), Michigan State Police, Detroit Police Department, and the other assets were here at the hotel at an undisclosed location to manage this situation," said Craig.

A large police presence was reported in downtown Detroit after hotel staff found a high-powered rifle and a 30 round magazine in a bag. Two of three suspects are now in custody.

While the scene unraveled Tuesday morning and afternoon, police believe the root of the incident started late Monday, after the two suspects were dropped off and checked into the hotel.

Around 7 a.m. Tuesday morning, a fire alarm went off - although police aren't sure if it was by accident or on purpose. Following a sweep by hotel staff is when officials discovered a bag behind an ice-making machine.

"...and contained in the bag was a high-powered weapon, often known as a Draco, AK47, 30-round magazine," said Police James Craig. "Also included was a bible."

Inside the bible were the names of several cities that were circled. While Detroit wasn't one of those cities circled, Craig did say some that were had been the previous sites of mass shootings.

Police don't believe the scene at Greektown Casino Hotel to be related to terrorism, however. At least one of the two suspects arrested has a history of drug-related offenses. Both are residents of the Cleveland area in Ohio.

"So the good news is, we've detained two, we were able to locate two of the three suspects. They were taken into custody without incident," said Craig.

Detroit Police don't know much about the third suspect, who is still on the run. 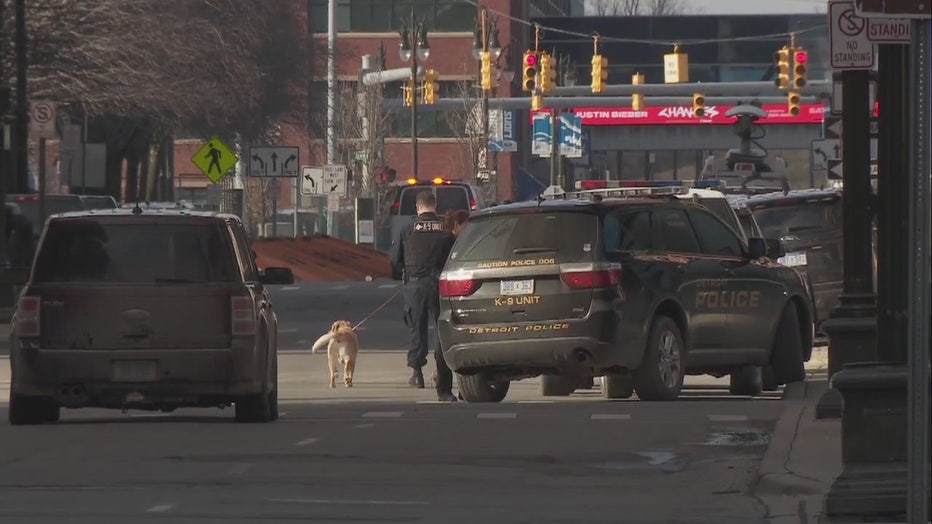 Police were able to defuse the situation by looking at video surveillance from the hotel, connecting the bag containing the rifle to the suspects who had checked into the hotel Monday night.

During a press conference Tuesday afternoon, Craig also cited several 'erroneous' reports regarding a barricaded gunman that had stationed himself in the hotel, overlooking the I-75 highway.