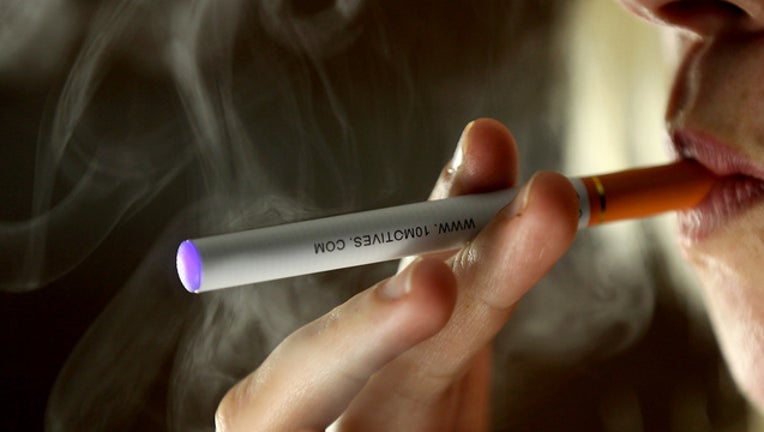 WASHINGTON (AP) - A major new study provides the strongest evidence yet that vaping can help smokers quit cigarettes, with e-cigarettes proving nearly twice as effective as nicotine gums and patches.

The British research, published Wednesday in the New England Journal of Medicine, could influence what doctors tell their patients and shape the debate in the U.S., where the Food and Drug Administration has come under pressure to more tightly regulate the burgeoning industry amid a surge in teenage vaping.

"We know that patients are asking about e-cigarettes and many doctors haven't been sure what to say," said Dr. Nancy Rigotti, a tobacco treatment specialist at Harvard Medical School who was not involved in the study. "I think they now have more evidence to endorse e-cigarettes."

At the same time, Rigotti and other experts cautioned that no vaping products have been approved in the U.S. to help smokers quit.

Smoking is the No. 1 cause of preventable death worldwide, blamed for nearly 6 million deaths a year. Quitting is notoriously difficult, even with decades-old nicotine aids and newer prescription drugs. More than 55 percent of U.S. smokers try to quit each year, and only about 7 percent succeed, according to government figures.

Electronic cigarettes, which have been available in the U.S. since about 2007 and have grown into a $6.6 billion-a-year industry, are battery-powered devices that typically heat a flavored nicotine solution into an inhalable vapor.

Most experts agree the vapor is less harmful than cigarette smoke since it doesn't contain most of the cancer-causing byproducts of burning tobacco. But there is virtually no research on the long-term effects of the chemicals in the vapor, some of which are toxic.

At the same time, there have been conflicting studies on whether e-cigarettes actually help smokers kick the habit. Last year, an influential panel of U.S. experts concluded there was only "limited evidence" of their effectiveness.

In the new study, researchers tracked nearly 900 middle-age smokers who were randomly assigned to receive either e-cigarettes or nicotine replacement products, including patches, gums and lozenges. After one year, 18 percent of e-cigarette users were smoke-free, versus 9.9 percent of those using the other products.

"Anything which helps smokers to avoid heart disease and cancer and lung disease is a good thing, and e-cigarettes can do that," said Peter Hajek, study co-author and an addiction specialist at Queen Mary University of London.

The study was more rigorous than previous ones, which largely surveyed smokers about e-cigarette use. Participants in this experiment underwent chemical breath testing.

Smokers in the e-cigarette group received a $26 starter kit, while those in the nicotine-replacement group received a three-month supply of the product of their choice, costing about $159. Participants were responsible for buying follow-up supplies.

"If you have a method of helping people with smoking cessation that is both more effective and less costly, that should be of great interest to anyone providing health services," said Kenneth Warner, a retired University of Michigan public health professor who was not involved in the study.

Several factors may have boosted the results: All the participants were recruited from a government smoking-cessation program and were presumably motivated to quit. They also received four weeks of anti-smoking counseling.

The researchers didn't test e-cigarettes against new drugs such as Pfizer's Chantix, which has shown higher rates of success than older nicotine-based treatments.

Funding for the study came from the British government, which has embraced e-cigarettes as a potential tool to combat smoking through state-run health services. Some of the authors have been paid consultants to makers of anti-smoking products.

U.S. health authorities have been more reluctant about backing the products, in part because of the long-term effects are unknown.

"We need more studies about their safety profile, and I don't think anyone should be changing practice based on one study," said Belinda Borrelli, a psychologist specializing in smoking cessation at Boston University.

An editorial accompanying the study and co-written by Borrelli recommended e-cigarettes only after smokers have tried and failed to quit with FDA-approved products. Also, doctors should have a clear timeline for stopping e-cigarette use.

No vaping company has announced plans to seek FDA approval of their products as a quit-smoking aid. Winning such an endorsement would require large studies that can take years and cost millions of dollars.

The FDA has largely taken a hands-off approach toward vaping. It has not scientifically reviewed any of the e-cigarettes on the market and has put off some key regulations until 2022. FDA Commissioner Scott Gottlieb has said he doesn't want to over-regulate an emerging industry that could provide a safer option for adult smokers.

The delay has come under intense criticism amid an explosion in teenage vaping, driven chiefly by devices like Juul, which resembles a flash drive. Federal law prohibits sales to those under 18, but 1 in 5 high school students reported vaping last year, according to a government survey. It showed teenage use surged 78 percent between 2017 and 2018.

Matthew Myers of the Campaign for Tobacco-Free Kids noted that the British study used so-called tank-based e-cigarettes, which allow users to customize their flavors and nicotine levels. Those devices have largely been overtaken in the U.S. by Juul and similar devices that have prefilled nicotine cartridges, or pods. Any benefit of e-cigarettes depends on the individual product and how it is used, he said.

"It is a fundamental mistake to think that all e-cigarettes are alike," Myers said. "And in the absence of FDA regulation, a consumer has no way of knowing if the product they are using has the potential to help them or not."

Myers' group is one of several anti-smoking organizations suing the FDA to immediately begin reviewing e-cigarettes.

Ian Armitage was skeptical about e-cigarettes as a way to stop smoking, saying he tried vaping several years ago but gave it up after experiencing twitching and shakes from nicotine withdrawal.

"I tried it for a whole month, but it just wasn't doing it for me," said Armitage, an audio-visual technician in Washington. "I still wanted a cigarette afterward."

Armitage, who has smoked for 15 years, said he also tried nicotine patches but found they irritated his skin.