Alicia Fox's children disappeared after she was murdered in 2014. While her estranged husband was locked up for the murder, her children are still gone.

DETROIT (FOX 2) - In June 2014, Alicia Fox's body was inside a vacant house in Detroit. The next year, her estranged husband was convicted in her murder and sentenced to 45 years in prison. But the question still remains: where are her kids?

Kaylah Hunter and Kristian Justice were 7 and 1 at the time they disappeared after her mother's death. To this day, they're still considered missing. For Alicia's mom, Travae, the heartbreak continues.

"After the face mask is over with, you gotta deal with the rest afterwards," Travae said. "He said nothing. Sitting there with a very narcissistic behavior and he said nothing,"

Her husband, Erin Justice, was convicted in 2015 and, in September of that year, he sat in the courtroom with no emotion when the judge sentenced him to at least 45 years in prison after he pleaded guilty to second degree murder. Travae is convinced that he knows what happened. 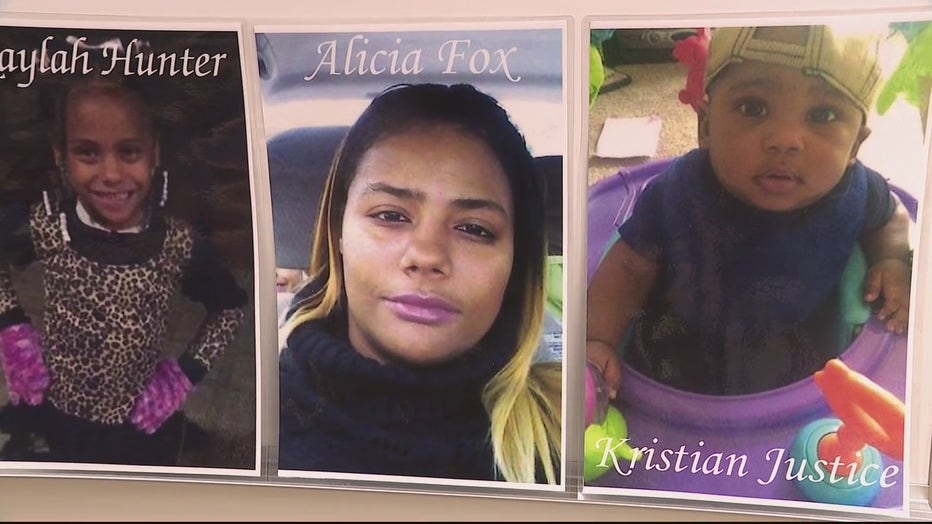 "I believe that somebody could have seen something and not even known until they were aware this happened. That's what most of my life consists of now - just trying to get them recovered or brought home," her sister, Christene Doughty, said.

On Wednesday, Michigan State Police hosted their annual Missing Persons Day event. Nearly 4,000 people in the state have been reported missing and approximately 900 are children.

Alicia’s family is alongside other families who are working together to solve their loved ones cases and support each other.

"Torment. It’s been torment. It's a never ending cycle - you go happy, sad. I go into stages of mourning, you know, because sometimes after so long you don’t want to give up but you want to give yourself closure," Christene said.

There’s always hope the case can be cracked and the family won’t give up. But they're also in the process they’re helping others.

"It’s for awareness, clarity and just all being together to a) support each other and b) you or somebody else may come up with something that you haven't done,"

Michigan State Police said the general public is the best tool they have to help.

"That’s really how we solve these cases - by getting word of mouth out there. I always tell people if you see a missing persons flier, share it; that’s the best way to get these people home," said MSP Lt. Sarah Krebs.