MILFORD, MIch. (FOX 2) - A Milford village employee claims he was extorted out of thousands by his boss, the director of public services, in a lawsuit Monday.

While working for the department, Michael Esson had a chance to make six figures in a matter of days working his side business at his cement company.

The village of Milford and the director of public services named in a lawsuit Monday says a village employee was extorted out of thousands by his boss for years.

"He would get side jobs, which is completely permissible," said Scott Batey, Esson's attorney.

According to Esson's attorney, he planned to take his own vacation time to do the job and asked his boss, the director of public services, to approve the time off.

"His supervisor is trying to charge him $20,000 to get a week off that he is entitled to."

According to the lawsuit Robert Calley wanted a 20 percent cut of the earnings in exchange for allowing him to take the time off for his cement job.

"This guy is his supervisor for a governmental entity, the village of Milford," Batey said. "He received this money from a client, just because of his position."

Esson's attorney says his client couldn't pass up the job and agreed to pay a lesser sum.

Esson allegedly would pay $100 a day for every day off that he earned for the next few years.

"He is stealing money from my client. two, he is using his public office to do so," Batey said.

Which raises the question why would his client continue to do it?

"You said why would he pay him; why wouldn't he just complain?" Batey said. "When he did complain they retaliated against him and fired him. At least this way he got to work for five years and earn some money."

Now that Esson has lost his job in Milford, he filed this lawsuit. The village sent us a statement, which says:

"The village was recently made aware of a potential lawsuit through a member of the media. we were provided a copy of what we believe to be the complaint, but have not yet been notified by the court of any suit. as such, neither the village nor its employees have any further comment."

FOX 2 attempted to talk with the director of public services directly and went to listed address in Hartland just outside of Milford. While there was a village of Milford service truck parked in the driveway, the man who answered the door said "wrong house" and shut the door immediately. 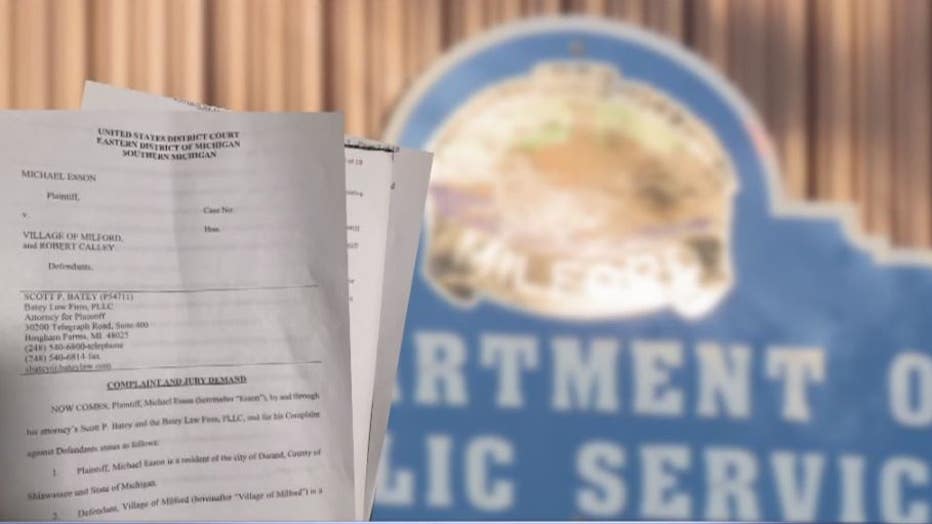