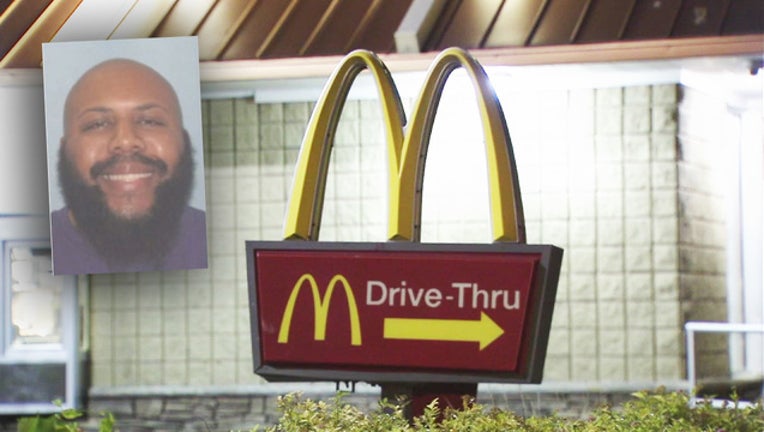 Facebook slaying suspect Steve Stephens was undone by a 20-piece Chicken McNuggets and an order of fries.

The man who police say shot a Cleveland retiree at random and posted video of the killing on Facebook pulled up to the drive-thru window of a McDonald's restaurant outside Erie, Pennsylvania, and waited for his order.

It was late Tuesday morning, almost lunchtime, and authorities were in the third day of an intensive manhunt for Stephens.

Now, more than 100 miles from the shooting, his time on the run was nearly up.

The attendant who took his money recognized the suspect and dialed 911. Stephens pulled up to the next window, where restaurant owner Thomas DuCharme Jr. and a supervisor tried stalling him by telling him his fries were delayed.

Stephens didn't want to wait. He took his McNuggets and whipped out of the parking lot, nearly hitting Gail Wheeler, 54, a retail operations manager from Erie who was on her way home from the grocery store.

"Two seconds later, I hear these sirens, and they come whipping past me," she told The Associated Press.

Wheeler followed behind for a couple miles. She said the chase slowed suddenly from 50 mph to about 20 mph when the road narrowed from four lanes to two.

One of the pursuing troopers picked his spot -- in front of an abandoned school -- and hit Stephens' bumper to get him to stop. The Ford Fusion did a half-turn and came to rest at the curb.

Police were starting to get out of their cruisers when "I heard a shot. It was loud and distinctive," Wheeler said.

State police Major William Teper Jr. said the trooper who bumped Stephens' car "saw him pull the gun out and shoot himself."