“When I saw him I said this is very rare, like we don’t get this every day," said Brookins.

She first met Officer Weathers when he was on patrol in an east side neighborhood.  Last August her son and other kids were out playing basketball and it attracted the attention of one DPD officer in particular - Weathers -  and that interaction made a lasting impression.

The encounter was caught on cell phone video and quickly spread for good reason.

For some of kids this was the first time they had ever met someone wearing blue.

“He was a good guy, perfect. nice, kind, everything," said Harris Lateler who played basketball with him that day.

“When they were playing basketball he was teaching them how to shoot and stuff," said a young girl.

A simple gesture - and one that from the videos he clearly enjoyed himself.

“These children out here a lot of them don’t have fathers anyway," Brookins said. "And by having him out here playing with the children that was very special to me and my family.”

Brookins says it was clear - this man truly cared.

“He wants people to do what is right in the city of Detroit," she said. "He loved his city.”

Which makes the reality of his death so much harder to understand.

"He was a good person," Garrett said. "To see someone like him fall. it’s crazy even to think about it.”

Darren Weathers, 25, had only been a police officer for a year and a half when he was tragically killed during a police training exercise.

He leaves behind a daughter of his own, who on the day he died was on her way up from Atlanta to see him.

“I just pray for his family," Brookins said. "I pray to God, rest his soul in peace because this is terrible.”

Prayers echoed by anyone who had the pleasure to see him in his element. 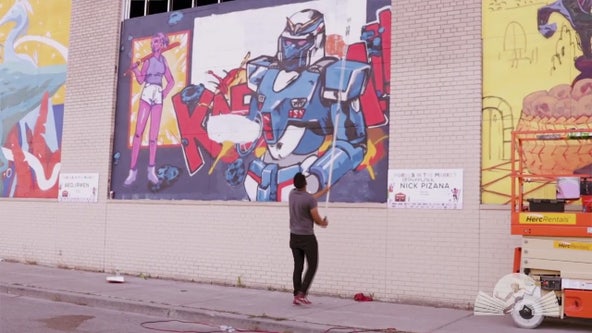