There are three factors that could lead to inflation which include demand-pull inflation, cost-push inflation and built-in inflation.

WASHINGTON - Conflicting signs about the health of the U.S. economy have thrust the Federal Reserve into a difficult spot.
With inflation raging at a four-decade high, the job market strong and consumer spending still solid, the Fed is under pressure to raise interest rates aggressively.

But other signs suggest the economy is slowing and might even have shrunk in the first half of the year. Such evidence would typically lead the Fed to stop raising rates — or even cut them.

For now, though, the Fed is focused squarely on its inflation fight, and this week it’s set to announce another hefty hike in its benchmark interest rate. Together with its previous rate increases, the Fed's moves will make borrowing costlier for individuals and companies and likely weaken the economy over time.

"Until there’s very clear evidence of the labor market beginning to meaningfully deteriorate, the No. 1 focus for the Fed must be inflation," said Matthew Luzzetti, chief U.S. economist at Deutsche Bank. 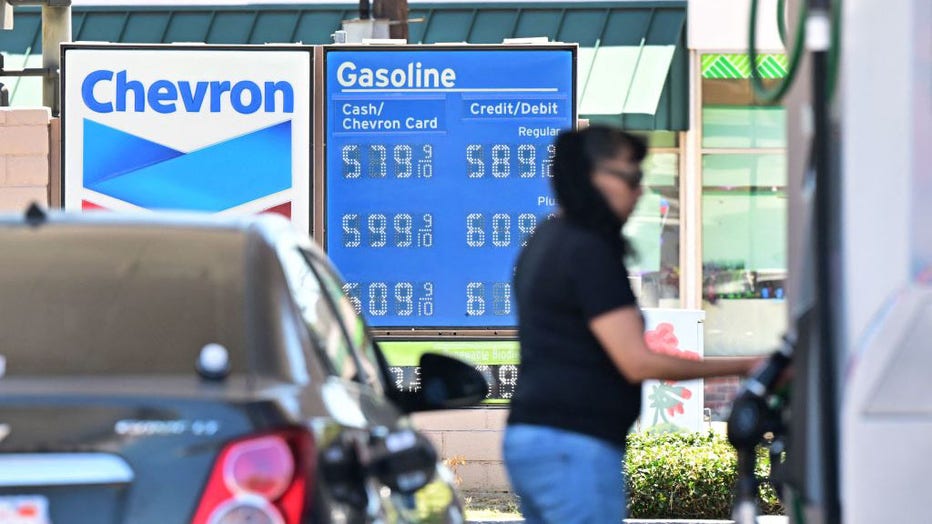 Gas prices are displayed at a petrol station in Monterey Park, California, on July 19, 2022. (FREDERIC J. BROWN/AFP via Getty Images)

When it ends its latest policy meeting Wednesday, the Fed is expected to impose a second consecutive three-quarter-point hike, elevating its key rate to a range of 2.25% to 2.5%. It will be its fourth rate hike since March, when it announced a quarter-point increase. Since then, with inflation setting new four-decade highs, the central bank has tightened credit ever more aggressively.

By raising borrowing rates, the Fed makes it costlier to take out a mortgage or an auto or business loan. In turn, consumers and businesses will likely borrow and spend less, cooling the economy and slowing price increases.

The Fed's hikes have already led to a doubling of the average rate on a 30-year fixed mortgage in the past year, to 5.5%, and home sales have tumbled. The central bank is betting it can slow growth just enough to tame inflation yet not so much as to trigger a recession — a risk that many analysts fear may end badly.

The Fed's rate hikes aren't suited to address all the causes of high inflation. Higher borrowing rates can reduce spending. But they cannot reverse other factors, notably the global shortages of food, energy, factory parts and other items, which have been worsened by Russia's war against Ukraine and COVID-19-related shutdowns in China.

It will also likely take months for the Fed's higher rates to reduce spending on airline flights, restaurant meals and other services. Many economists worry that this means the Fed will have to clamp down even harder on consumer and business demand, to bring it into balance with the economy's restricted supply of goods and labor.

A news conference that Chair Jerome Powell will hold Wednesday — and whatever signals, if any, he sends about the Fed's next steps — will draw intense interest. Since the Fed met in June, the government has reported that inflation accelerated to a 9.1% annual rate, the most since 1981.

Though that jump reflected a spike in gas prices, which have since declined, inflation worsened even after excluding the volatile energy and food categories.

The nation's June jobs report showed that hiring has remained healthy, with employers adding 372,000 jobs last month. Employers' continued need for labor has been elevating wages and contributing to inflation as companies pass their higher labor costs on to customers in the form of price increases.

Oddly enough, though, despite the robust job market and its role in keeping inflation high, by some measures the economy is barely growing, if at all. When the government reports Thursday on growth in the April-June period, it may show that the economy shrank for a second consecutive quarter.

Though two straight quarters of negative growth are sometimes seen as an informal definition of recession, few economists think the economy is in a downturn. Instead, recessions are defined by the National Bureau of Economic Research, a nonprofit group of economists.

The NBER assesses a broad range of data in determining recessions and places heavy weight on incomes and jobs. Economists note that employers have added 2.7 million jobs so far this year, which points to an economy far from recession.

If, as expected, the Fed raises its short-term rate this week to 2.25% to 2.5%, it would move it near a level that officials think neither stimulates nor discourages growth. After that, the policymakers could raise the rate in smaller increments to levels that would slow the economy. Fed officials have signaled that they expect to raise it to a range of 3.25% to 3.5% by year's end.

On Wednesday, Powell is expected to hammer home the Fed's determination to raise rates until inflation falls, even at the risk of slowing growth too much.

"What we’re looking for is compelling evidence that inflationary pressures are abating and that inflation is moving back down," he said at a news conference after the Fed's June meeting. "We’d like to see that in the form of a series of declining monthly inflation readings."

At a central banking forum last month in Portugal, Powell added: "Is there a risk that we would go too far? Certainly there’s a risk, but I wouldn’t agree that’s the biggest risk to the economy. The biggest mistake to make…would be to fail to restore price stability."

Other officials have made clear they expect the Fed to continue raising rates for the foreseeable future.

"I have not seen any convincing evidence that inflation has turned the corner," said Loretta Mester, president of the Federal Reserve Bank of Cleveland, earlier this month.

Still, the economy's conflicting signals have whiplashed Fed policy for months, leaving many analysts calling for a clearer message. In June, policymakers had signaled that a half-point rate hike was likely — until just before their meeting, when expectations abruptly shifted to a three-quarter-point increase.

And after the June inflation report showed that price increases were accelerating, Wall Street traders bet that the Fed would impose a full percentage point hike this week. That expectation, too, faded after several Fed officials dismissed the idea. The rapid swing in expectations was "borderline ridiculous," Krishna Guha, an economist at Evercore ISI, an investment bank, wrote to clients.

The policymakers should "lay out the thinking a little bit more of how they see the pace of rate increases going forward," said Ellen Meade, an economics professor at Duke University and a former senior Fed economist. "Will they react to a dramatic slowing in the economy if that should occur before they see inflation slow in a meaningful way? Having a little more information as to how they’re thinking about it could be helpful."