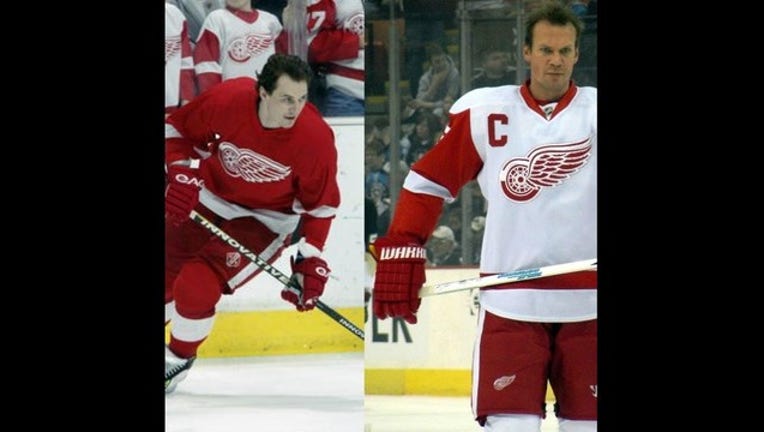 TORONTO (June 29, 2015) – Lanny McDonald, incoming Chairman of the Hockey Hall of Fame and John Davidson, Chairman of the Selection Committee, announced today that seven individuals have been elected to Hockey Hall of Fame Honoured Membership, five in the Player Category and two in the Builder Category.  The vote took place today at the annual meeting of the Selection Committee in Toronto.

In the Builder Category, Bill Hay and Peter Karmanos Jr. were elected.

The first NCAA graduate to play in the National Hockey League, Bill Hay's contributions to hockey span from grassroots to the professional level. His distinguished hockey resume includes contributions made while serving as President and Chief Operating Officer of Hockey Canada, President and Chief Executive Officer of the Calgary Flames, and most recently as Chairman of the Hockey Hall of Fame.

"Being recognized by my hockey peers is truly a great honour," said Hay. "Seeing the game - and the Hockey Hall of Fame - become truly international has been a tremendously rewarding experience."

One of hockey's great benefactors, Peter Karmanos Jr. has helped enable the success of dozens of American hockey teams and thousands of players. The Detroit native captured a Stanley Cup as Chief Executive Officer, Owner and Governor of the Carolina Hurricanes in 2006.

"Being included in the Hockey Hall of Fame class of 2015 ranks right up there with winning the Stanley Cup," said Karmanos. "Hockey has a special place in my heart. It is the greatest team sport, and I believe the greatest game a boy or girl could play. Giving more kids the chance to play at the highest levels has truly been a labour of love."

The first Russian to reach the 1,000 point milestone in the NHL, Sergei Fedorov played in six All Star Games, captured three Stanley Cups with the Detroit Red Wings, and was awarded the Hart Memorial Trophy as the league's most valuable player in 1994.

"I have always played hockey because I loved it, not because I wanted to win awards," said Fedorov. "But now that my career is over I realize how special it is to be recognized by the Hockey Hall of Fame. I am deeply honoured to be an inductee."

"I am absolutely elated to be entering the Hockey Hall of Fame as part of the class of 2015," said Housley. "One glance at the Legends who have already been enshrined proves that this really is the ultimate honour for a hockey player."

A seven-time recipient of the James Norris trophy as the NHL's top defenseman, Nicklas Lidstrom also captured four Stanley Cups with the Detroit Red Wings and an Olympic Gold Medal for Sweden.

"During my hockey career I was always focused on the next game or the next season, so I never allowed myself to imagine I'd be hearing from the Hockey Hall of Fame" said Lindstrom. "I took a lot of pride in being dedicated to the game, so it means a great deal to me to be recognized by those who know the game the best."

One of the toughest competitors to ever patrol the blue line, Chris Pronger captured both the Hart Memorial Trophy and James Norris Trophy in 2000. The native of Dryden, Ontario also captured two Olympic Gold Medals for Canada and a Stanley Cup with the Anaheim Ducks in 2007.

"It's very humbling to be included alongside the esteemed group of players and builders in the Hockey Hall of Fame's class of 2015," said Pronger. "It's very exciting to think about becoming an Honoured Member. It's certainly something I didn't expect while playing."

"I've visited the Hockey Hall of Fame many times, and never get tired of learning about the rich tradition of the inductees," said Ruggiero, who is the fourth female ever elected for induction. "The fact that I'm now joining them is very special, and the greatest accomplishment I can think of as a hockey player."

Established in 1943, the Hockey Hall of Fame's ("HHOF") mandate is to recognize and honour the achievements of players, builders and officials who bring special distinction to the game of hockey, and to collect, preserve, research and exhibit objects, images and resource materials connected with the game as it is played in Canada and throughout the world.  As a non-profit corporation and a registered charity under the Income Tax Act, HHOF owns and operates a museum and place of entertainment offering state-of-the-art exhibits, multimedia presentations and educational programming from its premises at Brookfield Place, Toronto, Canada.