DETROIT (FOX 2) - Flood victim Dennis Bell - has an awful lot of work to do for being newly retired.

"It was probably the third and a half step - and when I look down, it was a lake," Bell said. "I’m still cleaning up, there is so much sewage down there it's unbelievable."

They are working to get people registered for potential aid from the federal government. It is step one as FEMA assesses how widespread the damage is.

Last month - he came out of those widespread floods on Detroit’s east side - with minimal damage. But after last Friday’s rains, his basement was a disaster with about $30,000 of damage done.

"Everything is gone, there is nothing down there but the furnace is still down there - I don’t know if it works," Bell said.

Bell's home at Philip near Scripps was one of the 800 that FEMA representatives visited Wednesday.

They are working to get people registered for potential aid from the federal government. It is the first step as FEMA assesses how widespread the damage is.

"What have I got to lose, the president says he was going to help, so I expect help," Bell said.

FEMA is offering loans and grants in disaster situations, sometimes in addition to what insurance covers.

"There are a lot of things that are irreplaceable, that I can’t replace," he said.

Bell says his homeowner's insurance brings some comfort - the bigger worry for him is, the future.

"How can this happen not once but twice?" he said. "I don't know if I’m going to put the house up for sale. At a certain point you give up but I haven’t given up yet." 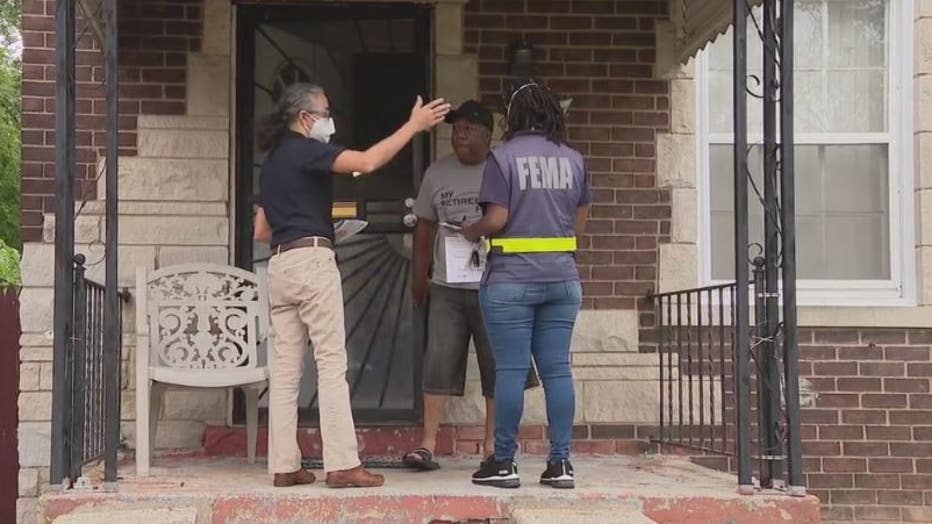 If you missed FEMA in the Jefferson Chalmers neighborhood Wednesday, fliers were left with the number (800) 621-FEMA (3362) to register for FEMA aid or you may go online at www.DisasterAssistance.gov