Twenty years ago, Erick All nearly died in a house fire. Today, the firefighter that saved his life remembers the baby he held in his arms in February 2001, while walking down the ladder against a burning house. All, now a standout for the Michigan Wolverines, still uses the lessons he learned from the team that saved him, his mom says.

(FOX 2) - One of the keys to the Michigan Wolverine's success has been their standout tight end Erick All. The junior earned an All-Big Ten Honorable mention this year. He makes big plays catching. And he made some key blocks this season too.

"He’s worked very hard to get where he’s at. He’s modest and humble. He’ll do anything the team asks of him," Kelly All, Erick's mom said.

But he learned those lessons from a different team - the one that saved his life.

Twenty years ago, All nearly died in a house fire. Today, the firefighter that saved his life remembers the baby he held in his arms in February 2001, while walking down the ladder against a burning house.

Tom Broyles, a firefighter from Richmond Indiana said he recalls seeing All's parents distraught in front of the burning building.

"I remember seeing his mother, there was a Village Pantry convenience store, she was on her knees in the parking lot crying. His dad was pacing in front of the house," he said.

In front of him was a house with flames coming out the second story.

"I went in. There was no visibility," he realled. "You’re searching around on the floor trying to find a crib or whatever it was… grabbed him. Couldn’t see him because he was limp and lifeless."

Kelly said it was the scariest time of her family's life. It's still difficult to talk about.

A newspaper clipping shows the moment that All emerged from the home. Just a baby, he's shown being held tight by Broyles.

But he wasn't out of danger yet.

"Next thing you know is here he is on a ventilator," Kelly said. "All they keep tell us is he’s stable but critical." 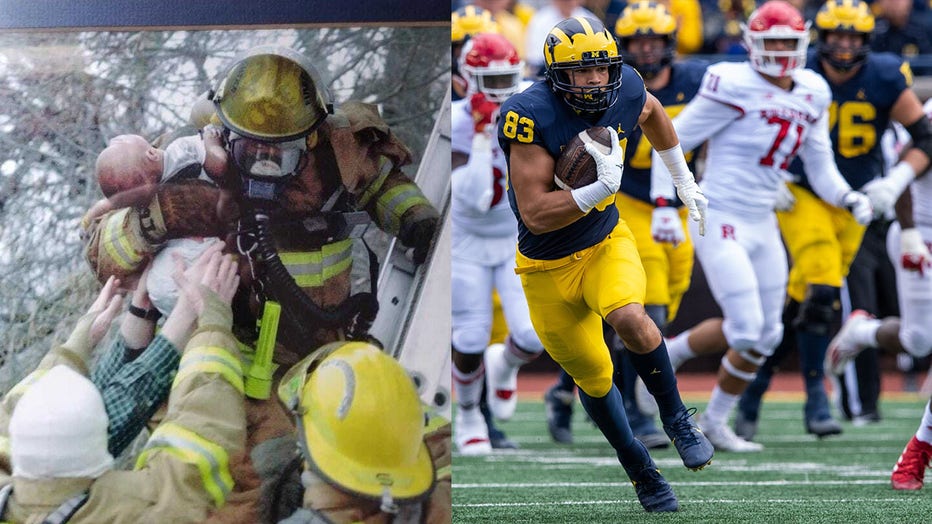 Indiana Firefighter Tom Broyles (left) cradles Erick All as a baby from a house fire. Erick All (right) runs with the football.

Two weeks later, Erick All was allowed to come home.

Two decades later, Broyles was watching the Big Ten Championship game between Michigan and Iowa. When he saw him score a touchdown, it jogged something in his memory.

"I saw him catch a touchdown in that game," he said. "I came home the next morning and told my wife 'I think it’s that child.'"

It was the first time he had seen Erick since that day. He attributes their success to a team effort.

Days after the game, Kelly All got a phone call from Broyle's wife - also named Kelly.

"(she was) saying, 'hey I hope you don’t mind but I shared a post on Erick. We’re just so amazed at where he’s at right now."

On the eve of the school's biggest football game in decades, the Wolverines even have a new fan cheering for them.

"We’ll definitely be Michigan fans today for sure and follow him the rest of his career now that we know we have a small connection there," said Broyles.