WARREN, Mich. (FOX 2) - Five people have been arrested after an argument over a dog turned deadly at a Warren mobile home park Monday.

At 11 a.m. Monday at the Twin Pines Mobile Home Park, police say the owner of a dog became angry after assuming the animal had gone missing. Police haven't released information detailing what exactly happened, but as an orange Jeep Renegade pulled out of the park someone open fired.

Five people have been arrested after an argument broke out over a dog Monday morning. Occurring at the Twin Pines Mobile Home Park near 11 Mile, a confrontation turned violent after one owner thought their dog was missing. Then, two mobile homes were peppered with bullets after police say someone in an Orange Jeep Renegade pulled out onto 11 Mile and shot at the park. A total of 14 shots were fired, although no one was injured. At least two could be facing charges of assault with intent to murder, although that number could climb after arraignments are expected on Tuesday.

Remarkably no one was struck by the bullets. However, two homes were hit by 14 bullets following the confrontation. Many families reside in the quiet community.

One resident said someone staying at his home was sleeping on a couch, which was in the middle of where two bullets pierced the exterior of the house. "If it was any lower and in the middle there, it would've probably hit him," said Charles Volker.

The park, which is located near 11 Mile in Warren, between Van Dyke and Mound, was blanketed with police officers soon after the incident. They soon tracked down four suspects, two men and two women to a motel in Sterling Heights, later finding a couple of handguns.

Investigators later executed a search warrant at the mobile park and arrested a fifth person, recovering another gun. 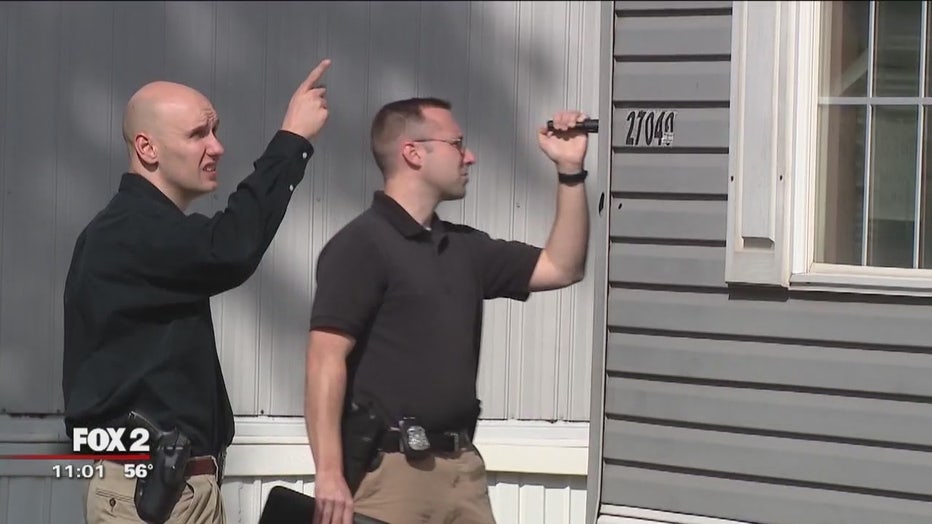 "That's something very stupid to bring a gun involved over. Especially with families around like me - there's five in my house," said Jayme Mastrogiovanni.

At least two, and up to four people could be charged with assault with intent to murder. Police plan to arraign the individuals soon.