Flat Rock officials and environmental representatives are monitoring an unknown odor that has drifted through the area. Officials are still awaiting results on what the material is and how much of it is there.

FLAT ROCK, Mich. - Officials in Flat Rock in southern Wayne County expanded its area of concern north Friday after a gasoline-like odor could be detected in multiple locations of the community's sewer system as well as could be smelled by residents.

Officials still aren't sure what the material is or how much of it there is and have yet to detect the source of the odor. An official with the Department of Environment, Great Lakes, and Energy said they are still awaiting results from lab tests of samples that were taken.

While there have been no reports of illness or death the mayor said, he didn't discount the possibility that something dangerous was in the water system.

"It's absolutely not nothing," said Mayor Mark Hammond, speaking to reporters Friday morning. "There is a problem, an environmental concern in our sanitary sewer systems."

So far, six homes have been evacuated out of precaution and the River Heights Academy charter school was temporarily closed until at least next week.

This week, residents in Flat Rock have been dealing with a foul odor. Thursday, Michigan declared a disaster for the area. Now leaders are trying to determine the source and how to clean it up.

The city's fire chief said between 200 and 300 people had been involved in the effort to discern the odor's source, receiving manpower assistance from multiple counties as well as state and federal environmental representatives.

The original perimeter established by the city extended from Gibraltar to the north, I-75 to the east, Huron River Drive to the South and Cambridge to the west. However, crews expanded that perimeter a mile north to Vreeland after "findings" from Thursday night came in.

Neither Hammond nor the EPA or EGLE reps would expand on what exactly they were. 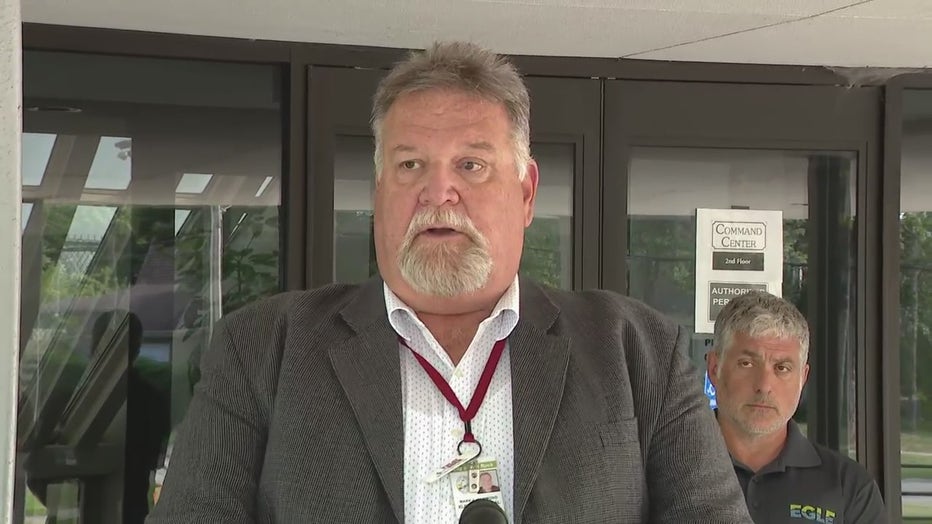 The odor was originally detected Monday night and crews were out Tuesday morning investigating.

After further investigating, Wayne County issued a state of emergency declaration Thursday evening, enabling increased access to resources and manpower. The city said its also been in contact with the governor's office.