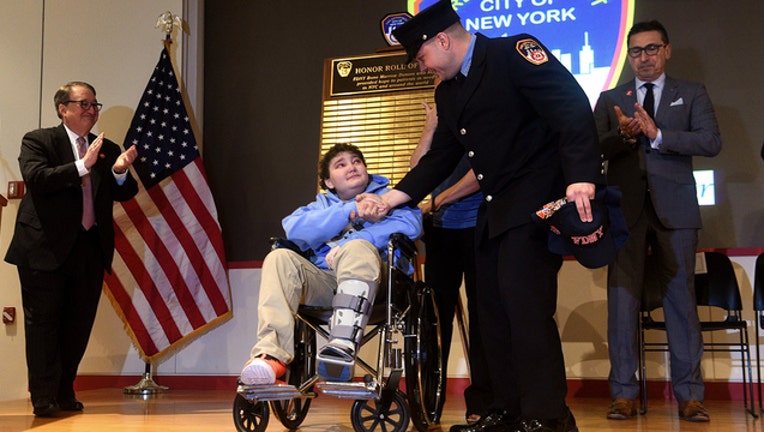 NEW YORK - There wasn't a dry eye in the house when a 14-year-old boy from Deltona, Florida got to meet the man who provided a life-saving gift.

Kyle Richardson was diagnosed with Hodgkin’s Lymphoma, a blood cancer of the lymph system, and he was in desperate need of a bone marrow transplant.  That's where New York City firefighter Robert Humphries comes into the picture.

Humphries, 30, joined the FDNY in June 2008 where he originally served as an EMT for four years at two stations in Brooklyn. He signed up for the Be The Match Registry in 2013 while training to become a firefighter. He was called to give life-saving bone marrow by the registry in 2015 and 2016, and both times he never hesitated. His second call was to help Richardson.

“I was willing to do whatever they had asked…knowing that my bone marrow could save someone’s life,” Humphries said. “I wouldn’t hesitate to do it again.”

Richardson has been in remission since April 2016. His mother, Dawn, describes her son’s bone marrow donor as their “New York Angel,” and expressed her gratitude when the two got to meet during a ceremony in New York City on Friday.

To learn more about the Be The Match Registry, click here.