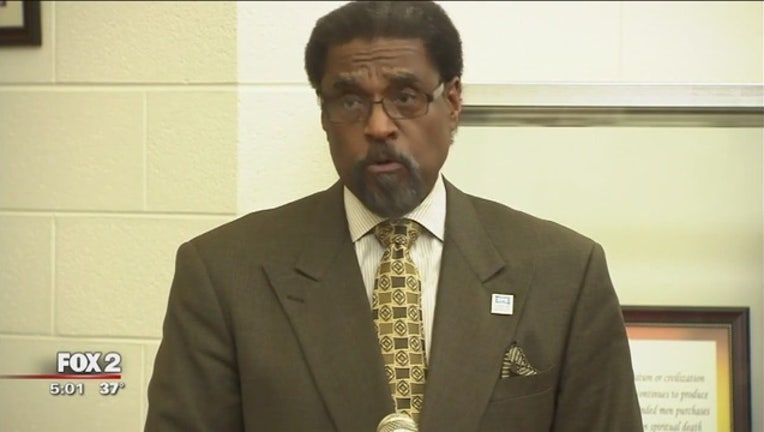 WASHINGTON (AP) - FOX 2 will be livestreaming the testimony when it begins at 10 a.m. You can watch in the video player below, or by tapping here.

The state-appointed emergency manager who oversaw Flint, Michigan when its water source was switched to the Flint River says he was "grossly misled" by state and federal experts who never told him that lead was leaching into the city's water supply.

Darnell Earley says in prepared testimony for the first of two congressional hearings that he was overwhelmed by challenges facing the impoverished city and relied on experts from the Michigan Department of Environmental Quality and U.S. Environmental Protection Agency to advise him.

He and other Flint leaders "were all totally dependent" on analysis and expertise provided by state and federal officials, Earley said, adding that "it would have been unreasonable ... to reject their guidance and attempt to make independent rulings on a highly sophisticated and scientific subject matter."

For months after the April 2014 switch he believed information he was receiving - some of it scientifically complex - was accurate, Earley said.

But in hindsight he said he should have done more to challenge the experts who told him Flint's water problems were harmless to human health and geographically limited in nature.

"In relying on experts, the solutions I oversaw failed to ameliorate the troubles plaguing Flint's water," Earley says in prepared testimony for a hearing Tuesday before the House Oversight and Government Reform Committee.

The Associated Press obtained a copy of Earley's testimony in advance.

Flint switched its water source from Detroit's water system to the Flint River in 2014 to save money, but the river water was not treated properly and lead from aging pipes leached into Flint homes and businesses. Elevated levels of lead have been found in some children's blood, with lead contamination linked to learning disabilities and other problems.

The chain of events has spurred calls for Republican Gov. Rick Snyder to resign amid outrage over the treatment of the people of Flint, a predominantly African-American city. A recall effort is under way in Michigan for Snyder, who has been widely blamed for the crisis.

The governor is scheduled to appear before the committee on Thursday, along with EPA Administrator Gina McCarthy.

Former Flint Mayor Dayne Walling blamed the crisis on the state of Michigan's focus on balancing the city's books and "choosing low cost over human consequences."

Walling also faulted the state's emergency manager law, which placed Flint effectively under state control since November 2011. The law "takes away the natural checks and balances" of democratic government and "minimizes the voices of the citizens by placing control so far away from the community," Walling said.

The five emergency managers who have run Flint were all appointed by and reported to the Republican governor, Walling said, as did the director of the Michigan Department of Environmental Quality.

Earley, a longtime school administrator and municipal official who previously served as city manager in Saginaw, Michigan, took over as emergency manager in Flint in October 2013 - seven months after the Flint City Council approved the water switch and former emergency manager Edward Kurtz signed it.

Earley said he was given a variety of explanations for coliform bacteria detected in the city's water in 2014. Explanations ranged from low-water pressure to an unauthorized connection to a sampling error, he said. Under state guidance, the city advised Flint residents to boil their water before using it.

"At absolutely no time during these boil-water advisories were the issues of corrosion control or lead leaching brought to my attention," Earley said.

Tuesday's hearings is the first of two scheduled this week on the Flint crisis. Susan Hedman, the former head of the EPA's Midwest regional office, is also to testify Tuesday. Hedman resigned Feb. 1 as the Flint crisis worsened.

"The people of Flint were being poisoned in their own homes by the water they used every day for drinking and bathing," said Chaffetz, who visited Flint over the weekend.

"It is almost unbelievable how many bad decisions were made" at all levels of government, Chaffetz said.