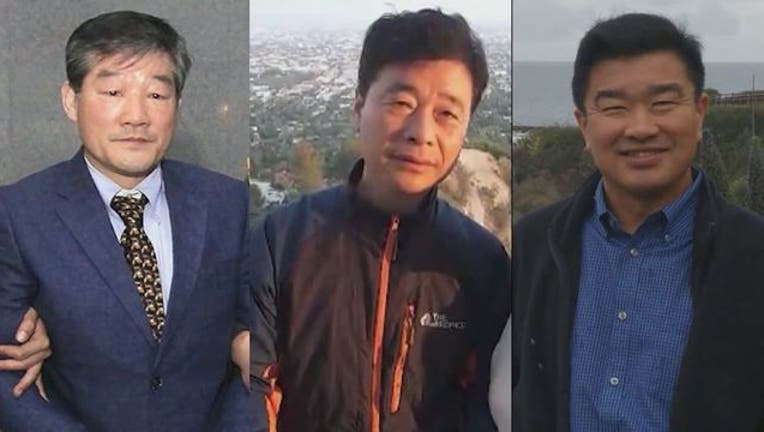 WASHINGTON (AP) — Freed after more than a year in prison, three Americans flew homeward from North Korea late Wednesday toward a big middle-of-the-night celebration featuring President Donald Trump — the latest sign of improving relations between longtime adversaries in the buildup to a historic summit between Trump and North Korea's Kim Jong Un.

Trump promised "quite a scene" at Joint Base Andrews outside Washington for the detainees, who were released as Secretary of State Mike Pompeo visited North Korea on Wednesday to finalize plans for the summit. Singapore was the likely site, late this month or in early June, for Trump's most ambitious foreign policy effort yet.

Shortly after they touched down on American soil in Alaska — for a refueling stop Wednesday afternoon— the State Department released a statement from the freed men.

"We would like to express our deep appreciation to the United States government, President Trump, Secretary Pompeo, and the people of the United States for bringing us home," they said. "We thank God, and all our families and friends who prayed for us and for our return. God Bless America, the greatest nation in the world."

The men had boarded Pompeo's plane out of North Korea without assistance and then transferred in Japan to a separate aircraft with more extensive medical facilities. They are expected to arrive at Joint Base Andrews outside Washington in the wee hours of Thursday morning.

Trump made a point of publicly thanking North Korea's leader for the prisoners' release — "I appreciate Kim Jong Un doing this" — and hailed it as a sign of cooling tensions and growing opportunity on the Korean peninsula. Kim decided to grant amnesty to the three Americans at the "official suggestion" of the U.S. president, said North Korea's official news agency, KCNA.

North Korea had accused Kim Dong Chul, Kim Hak Song and Tony Kim, all Korean-Americans, of anti-state activities. Their arrests were widely seen as politically motivated and had compounded the dire state of relations over the isolated nation's nuclear weapons.

Trump entered office as an emboldened North Korea developed new generations of nuclear weapons and ballistic missiles capable of hitting the continental U.S. Those advances were the subject of President Barack Obama's starkest warning shortly before Trump took office, and this is a crisis he's convinced his negotiating skills can resolve.

Crediting himself for recent progress, Trump has pointed to Kim's willingness to come to the negotiating table as validating U.S. moves to tighten sanctions — branded "maximum pressure" by the president. The wee-hours ceremony Thursday was to be an early celebration for an issue that has already put the prospect of a Nobel Peace Prize on Trump's mind.

"Everyone thinks so, but I would never say it," he said Wednesday when asked if the award was deserved.

The release capped a dramatic day of diplomacy in Pyongyang. After Pompeo's 90-minute meeting with Kim Jong Un, he gave reporters a fingers-crossed sign when asked about the prisoners as he returned to his hotel. It was only after a North Korean emissary arrived a bit later to inform him that the release was confirmed.

The three had been held for periods ranging from one and two years. They were the latest in a series of Americans who have been detained by North Korea in recent years for seemingly small offenses and typically freed when senior U.S. officials or statesmen personally visited to bail them out.

The last American to be released before this, college student Otto Warmbier, died in June 2017, days after he was repatriated to the U.S. with severe brain damage.

Warmbier was arrested by North Korean authorities in January 2016, accused of stealing a propaganda poster and sentenced to 15 years in prison with hard labor. His parents, Fred and Cindy Warmbier, have filed a wrongful death lawsuit, accusing the government of torturing and killing their son.

"We are happy for the hostages and their families," the Warmbiers said in a statement Wednesday. "We miss Otto."

Of the newly released detainees, Kim Dong Chul, a South Korean-born U.S. citizen, had been held the longest. The former Virginia resident was sentenced in April 2016 to 10 years in prison with hard labor after being convicted of espionage. He reportedly ran a trade and hotel service company in Rason, a special economic zone on North Korea's border with Russia.

The other two detainees hadn't been tried.

Kim Hak Song worked in agricultural development at an experimental farm run by the Pyongyang University of Science and Technology, or PUST. The university is the only privately funded college in North Korea and was founded in 2010 with donations from Christian groups. He was detained last May for alleged anti-state activities.

Tony Kim, who also uses the name Kim Sang-duk, was detained in April 2017 at the Pyongyang airport. He taught accounting at PUST. He was accused of committing unspecified criminal acts intended to overthrow the government.

The family of Tony Kim thanked all those who worked for his return and also credited Trump for engaging directly with North Korea. "Mostly we thank God for Tony's safe return," the family said in a statement.

On Capitol Hill, Senate Democratic leader Chuck Schumer celebrated the detainees' return but warned that "we'll see many more hostages" if the administration provides an incentive for imprisoning Americans.

"We are happy they've returned, but North Korea shouldn't gain by taking Americans and then releasing them," he said.

During his visit, Pompeo discussed the agenda for a potential Trump-Kim Jong Un summit. Pompeo said the summit is scheduled to last one day but could be extended by a day depending on how talks progress.

North Korea's state-run media explicitly mentioned plans for the summit for the first time. Pyongyang has been exceptionally cautious about its public framing of Kim's recent diplomatic moves, which are a major shift from the more aggressive focus on missile launches and nuclear development that drove tensions to a boil last year.

Pompeo's trip, his second to North Korea this year, had not been publicly disclosed when he flew out of Washington late Monday aboard an Air Force jetliner. Trump announced the mission Tuesday afternoon as he laid out his case for withdrawing from a landmark nuclear deal with Iran, another bitter U.S. adversary.

Accompanying Pompeo were a few senior aides, a security detail and two journalists — one from The Associated Press and one from The Washington Post.

Pompeo, who first traveled to North Korea as CIA chief in early April, was only the second sitting secretary of state to visit the nation with which the U.S. is still technically at war. The first was Madeleine Albright, who went in 2000 as part of an unsuccessful bid to arrange a meeting between then-President Bill Clinton and Kim Jong Un's father, Kim Jong Il.

A Trump-Kim meeting seemed a remote possibility just a few months ago when the two leaders were trading threats and insults over North Korea's development of nuclear weapons and ballistic missile tests. In March, Trump unexpectedly accepted an offer of talks after the North Korean dictator agreed to suspend nuclear and missile tests and discuss "denuclearization."