WATCH: Troy police video of tanker truck crash on I-75

TROY, Mich. (FOX 2) - I-75 in both directions will likely be closed for several days after a massive tanker truck fire in Troy on Monday.

The cloud of black smoke could be visible for miles around I-75 after the tanker truck caught fire in the northbound lanes as the freeway turns after crossing over Big Beaver in Troy.

Troy Fire Department Lt. Dan Mahrle said they're not sure what started the fire but said the driver was able to get into an ambulance and was alert. His current condition is not known.

The fire happened in a part of I-75 that has been under construction for the past few years. After the fire was put out, there were black marks on the cement barricade. Lt. Mahrle said it wasn't known if the tanker hit the barricade or not.

Fuel tanker catches fire on I-75 in Troy

A fuel tanker caught fire Monday afternoon in Troy on I-75 at Big Beaver. Video from the scene shows a massive plume of black smoke rising from the fire.

MDOT spokesperson Rob Morosi said it's going to take some time to get the truck completely cooled off before it can be towed away and the thousands of gallons of fuel can be cleaned up.

Morosi said that it's unknown when the road inspection will happen but it all depends on when the cleanup is done.

I-75 could be closed for days after tanker fire

The tanker fire that closed both directions of I-75 in Troy on Monday will likely keep the highway closed for several days after severe heat may have buckled the recently built roadway.

He said that section of the new freeway may have be torn out and rebuilt because of the fire. 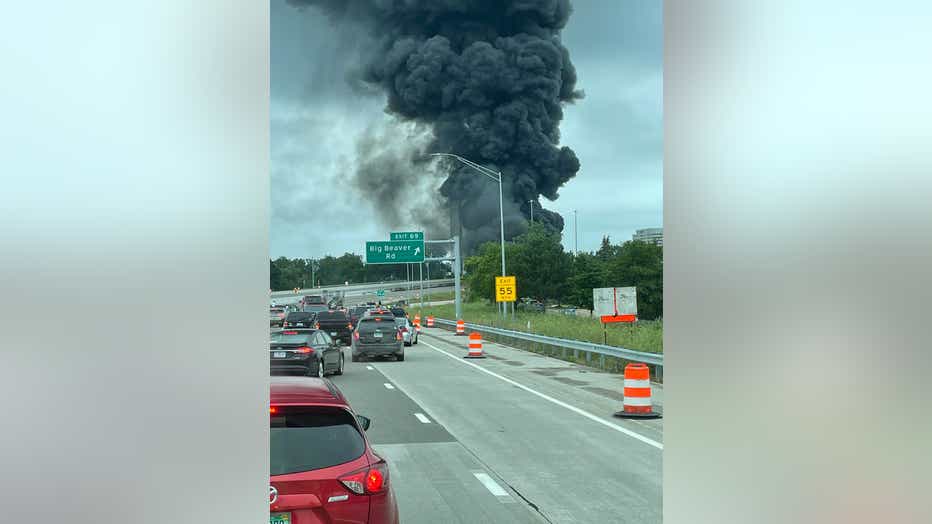