As of this morning, Governor Whitmer has declared a state of emergency for Lapeer, Macomb, Oakland and St. Clair counties following yesterday's water main break.

935,000 people in 23 communities were initially impacted on Saturday when the break was first discovered. 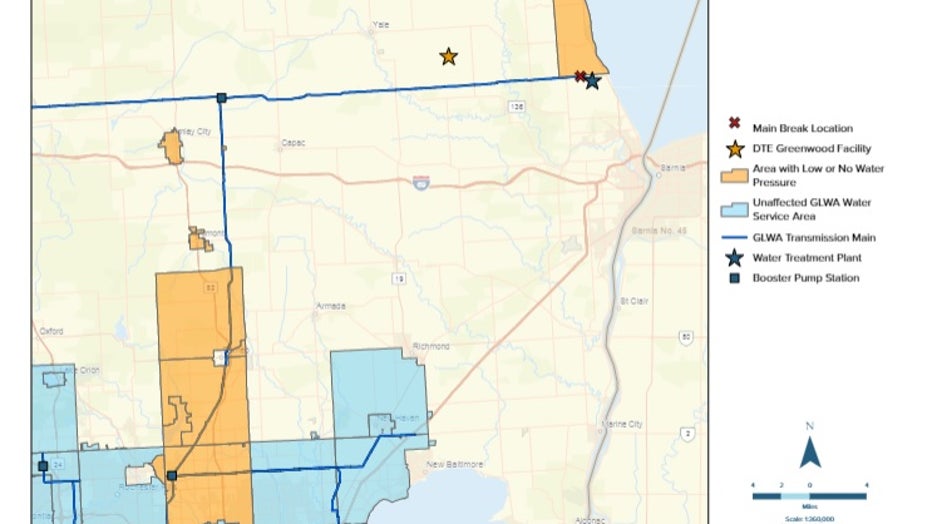 A Boil Water Advisory remains in effect for the following impacted communities:

A business in Greenwood and an industrial park in Romeo are also still under the Boil Water Advisory.

Communities that are still impacted must bring water to a boil for at least one minute and then let it cool before using it, said the GLWA. Residents should use boiled, bottled or disinfected water for drinking, making ice, washing dishes, brushing teeth, and preparing food until further notice, according to the advisory.

Water flow and pressure has been restored to all communities impacted by the water main break as of Sunday morning, according to the GLWA.

"While it will not be at normal levels, there will be enough flow to use for sanitary purposes. GLWA was able to accomplish this by making changes in the direction that water is pumped in the transmission system."

As of this morning, Governor Whitmer has declared a state of emergency for Lapeer, Macomb, Oakland and St. Clair counties following yesterday's water main break. This declaration authorizes all state resources to cooperate with local recovery efforts and maximizes the state's assistance efforts.

"We are drawing on every resource we have and taking every action necessary to get impacted families the help they need," said Governor Whitmer. "On Saturday, I activated the State Emergency Operations Center to coordinate our response efforts, and with today’s state of emergency declaration, we are ensuring that state resources will be available as long as the impacted communities need them. In times of crisis, Michiganders stand together. We will do what it takes to get through this."

The State Emergency Operations Center (SEOC) was activated at 4 p.m. on Saturday in response to multiple requests for additional resources from local communities. SEOC personnel are monitoring the situation and working with state and local officials as well as private sector partners to ensure any resource needs are met, according to the press release.

The break in the 120-inch water transmission main has been isolated and crews have started to remove water from the site using four eight-inch pumps. This will prepare the area for repairs while the replacement pipe makes its way to the state by truck from Texas, according to the GLWA. 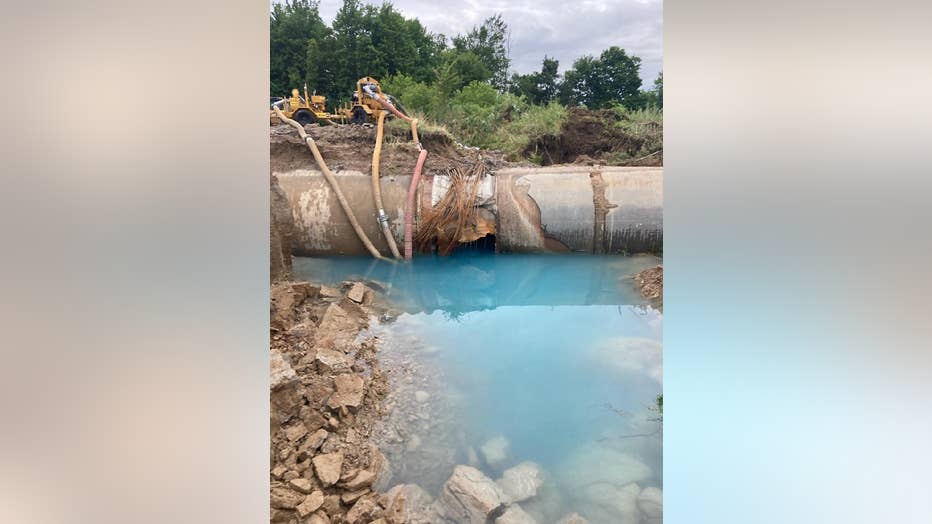 The pipeline is expected to be repaired within two weeks; one week for repairs and another for water quality testing. The GLWA says this timeline will prevent any unforeseen circumstances.

The cause of the break is still under investigation.

The precautionary Boil Water Advisory for Chesterfield Twp, Lenox Twp, Mayfield Twp, Macomb Twp, and the Village of New Haven was previously lifted after reviews showed the water pressure stayed above 20psi, according to the GLWA.

"GLWA understands the real-life impact that this water main break is having on the hundreds of thousands of people in the affected communities and we truly appreciate their patience and understanding as we work to implement the necessary repairs," said Suzanne R. Coffey, GLWA Chief Executive Officer. "I am grateful for the GLWA team who has been working tirelessly to restore water pressure to all communities and working as quickly as possible to restore service."

Updates will be provided as information becomes available.