The Democrat enacted the plan amid a standoff with GOP lawmakers over road funding. Her 147 line-item vetoes totaled a historic $947 million. That included $128 million in the K-12 budget and $375 million in one-time discretionary funds for roads and bridges, after talks broke down over a permanent increase in transportation spending.

The governor also line-item vetoed $375 million in one-time road funding and remains ready to roll up her sleeves to achieve a real, long-term funding solution that will actually fix the damn roads.

"These budgets were a mess," Whitmer told The Associated Press. "There were a lot of legislative pork projects, a lot of taking money from important foundational objectives of the departments to cobble together a phony one-time road plan. They created a lot more problems than they solved in this budget."

The near-$1 billion in stripped funding could be added back into the $59 billion spending plan later, pending negotiations.

The first-year governor was poised to shape the budget further Tuesday, when a state board that she controls was scheduled to meet to take the extremely rare step of going around the Legislature to transfer money within individual departments. She said it was too early to discuss the meeting but that no one should be surprised she would do "everything in my power" to protect public health and safety.

"There are powers inherent in the executive office that I've been forced to use because this Legislature wasn't serious about negotiating budgets," Whitmer said.

She acted Monday following an unusual budgetary process in which she had no input in the final measures after a breakdown in talks, though some of her priorities were included -- such as a $120 million boost to protect drinking water and clean up contamination.

"I've been forced to use the tools at my disposal," Whitmer said. "This is not how I was hoping things would play out, but this is where we're at and I'm very serious about protecting the people of this state."

Republican legislative leaders, who have accused Whitmer of walking away from budget discussions, could not immediately be reached for comment.

They have touted the spending plan that would not include funding from her 45-cents-a-gallon fuel tax hike to improve the roads and free up funds for education. The $2.5 billion tax increase never gained traction since it was unveiled in March, and Whitmer agreed three weeks ago to table talks on a long-term road-funding plan until after finalizing the budget.

But negotiations quickly stalled when GOP legislators insisted on shifting hundreds of millions of discretionary funds to the $5 billion transportation budget.

"They violated that agreement within 60 minutes," Whitmer said.

On Monday, she blocked $375 million of a $400 million general fund transfer to road and bridge repairs, saying it "isn't going to change the situation that we're confronting in our infrastructure. In fact, it is the most expensive, foolish way that you can go about fixing an ongoing infrastructure crisis like we have."

She also criticized Republicans for not backing $185 million in additional funding for at-risk, special education and vocational students in the school budget, along with an expansion of preschool to more than 5,000 kids and the installation of new drinking fountains in 3,300 public schools. Republicans have noted that school aid spending would still rise by $391 million, or 2.8%, and include a $240 per-student, or 3%, increase for most schools.

A list of the line-item vetoes was not immediately available. Asked to give examples, Whitmer said there was "a ton of vendor-specific pork barrel-project spending" in the school aid budget. 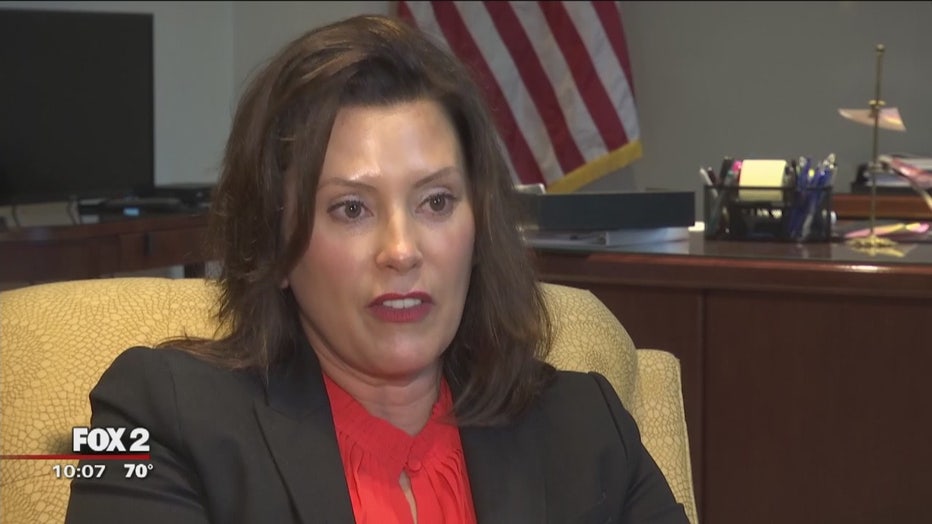 She said she vetoed $1.5 million for Florida-based Algebra Nation, which provides a free supplemental Algebra 1 resource for students and teachers. She cited a letter she received last week from four lawmakers, including three Republicans, urging her to veto that and $56.2 million in other funding that they said schools could better spend at their discretion.

Whitmer also faulted GOP legislators for spending less than what she proposed in three departments: Corrections, Technology, Management and Budget, and Health and Human Services. The funding levels would likely force up to 250 layoffs and cease electronic tracking of released sex offenders and other inmates, according to her office.

The budgets also would weaken cybersecurity and public safety communications, and not fund the implementation of Republican-backed work requirements for people enrolled in the state's Medicaid expansion program, Whitmer said.

Health and Human Services Director Robert Gordon on Monday raised many concerns with the agency's proposed budget, including the lack of $50 million he said is needed to make sure the federal government continues funding Medicaid insurance for millions of low-income residents. He also opposed cuts to programs for children with disabilities, those in the child-welfare system, juvenile justice, residential substance abuse treatment and mental health.

Gordon said legislators did not include a requested $10 million to facilitate the work-related requirements and cut $2.9 million that could help with implementation.

"They're not funding their own program," he said.

Senate Majority Leader Mike Shirkey's office said last week that the state has enough funding and budget flexibility to implement the work rules that will take effect in January.

Whitmer's budget vetoes were the most significant since at least 2009, when then-Gov. Jennifer Granholm pruned $127 million from a proposed budget following a brief, partial government shutdown during the Great Recession. It was also the last time Michigan had a divided government, with a governor from one party and a Legislature partly or fully held by the other party.

Below is a release from Whitmer's office:

Governor Gretchen Whitmer has signed all 16 state budgets and issued 147 line-item vetoes to protect Michiganders public health and safety, access to healthcare and classroom spending for our children.

Line-item vetoes to the School Aid budget alone exceed $128 million and include legislative pork barrel spending that steals precious classroom dollars and instead hands it out to commercial vendors.

The governor also line-item vetoed $375 million in one-time road funding and remains ready to roll up her sleeves to achieve a real, long-term funding solution that will actually fix the damn roads.

"The Republican budgets were a complete mess, and today I used my executive powers to clean them up to protect Michiganders," said Governor Whitmer. "The state's budget is a reflection of our values, and make no mistake that public health and safety, access to health care, and protecting classroom spending is more important than handouts to lobbyists and vendors."

These cuts would likely:

Prevent the opening of the new Vocational Village at the Women's Huron Valley Correctional Facility and could threaten the closure of the two existing villages in the next fiscal year, lead to nearly 100 layoffs, and would cease the monitoring of sex offenders and other criminals by not replacing 4,000 GPS tethers.

Republicans cut nearly $53 million from the Department of Technology, Management and Budget, including a cut to operations spending that would hurt Michiganders' public safety, weaken cybersecurity, and force up to 150 layoffs.

Republicans cut $33 million to the Department of Health and Human Services from the governor's proposal and failed to fund the implementation of their own work requirement laws that Governor Whitmer signed on September 23, potentially kicking tens of thousands of Michiganders off their health care and devastate families across the state.

"The legislature is broken. Talking point budgets don't fix our fundamental problems as a state. The budgets they passed don't do enough to give our schools the resources they need to educate our kids," said Governor Whitmer. "They won't protect our communities, ensure clean, safe drinking water in our schools, and they won't do a damn thing to fix the roads."

"While line item vetoes can only clean up so much of this mess, additional steps will be needed to protect Michiganders, protect access to health care, and help close the skills gap, and it will take Republicans and Democrats working together to get it done."