DETROIT (AP) - Gov. Gretchen Whitmer has proposed a $61.9 billion state budget, including what she says would be the biggest increase for Michigan classroom operations in 20 years and funding aimed at combating infant mortality and the effects of climate change.

The Democrat’s plan would boost overall spending by 3.9% without a tax hike. The 4.1% increase for school operations, excluding retirement and other costs, would be the largest on a percentage basis in 19 years, according to the state budget office.

Most traditional and charter schools would see their base per-student funding rise by $225, or nearly 2.8%, while better-funded districts would get $150 more or roughly 1.8%. Separate pools of funding for special education, at-risk and English language learners would also grow, by $143 million.

“This is evidence-based. We know that when we prioritize our spending this way that we really are ensuring we’re leveling the playing field for kids so we can have level outcomes,” Whitmer told reporters after budget director Chris Kolb presented the proposal to the Republican-led Legislature.

Unlike last year, her first as governor, Whitmer did not make a major fuel tax increase the linchpin of her proposal after last week announcing that the state will borrow $3.5 billion to fix state-owned roads and bridges. Without new, dedicated transportation revenue, she also abandoned her attempt to stop automatically shifting income tax revenue to roadwork as required under a 2015 law. The money had previously gone to the general fund.

“I don’t tilt at windmills. I am realistic,” Whitmer said. “I put a solution on the table last year. I’m moving forward and I’m delivering on a lot of these fundamentals that I think are important for Michigan that I ran on and I know the people of Michigan care about.”

Key initiatives include better funding the state’s preschool program with a $35.5 million increase and creating a new $42 million program to expand state-funded preschool services to 5,000 4-year-olds. To qualify, they must live in one of 26 districts with high numbers of low-income students and third-graders who score low in reading.

Whitmer proposed giving districts $25 million in funding so that each teacher has $250 to spend on classroom supplies and awarding $40 million in grants to help districts make infrastructure improvements.

Her plan includes giving $40 million in grants to help communities confront record-high water levels in the Great Lakes and other severe weather events that have caused problems, such as flooding and coastline erosion. 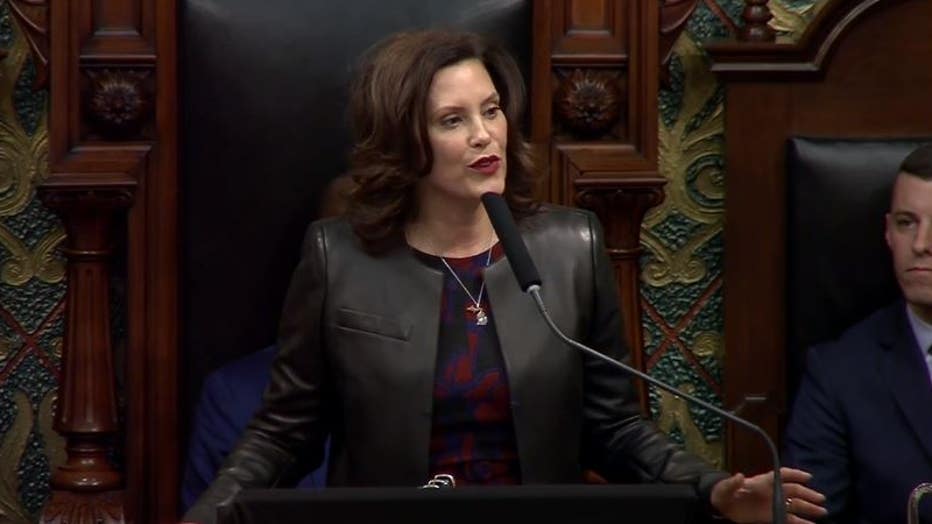 Whitmer proposed spending $37.5 million to extend the Medicaid eligibility period for new mothers, increase access to family planning services and boost in-home visits to at-risk families. She also proposed providing state employees with up to 12 weeks of paid parental leave for a birth or adoption.

She again sought funding for her proposed Reconnect program to provide tuition-free community college or technical training to nontraditional students age 25 and older who do not have an associate’s or bachelor’s degree. It is backed by the business lobby but was not enacted last year.