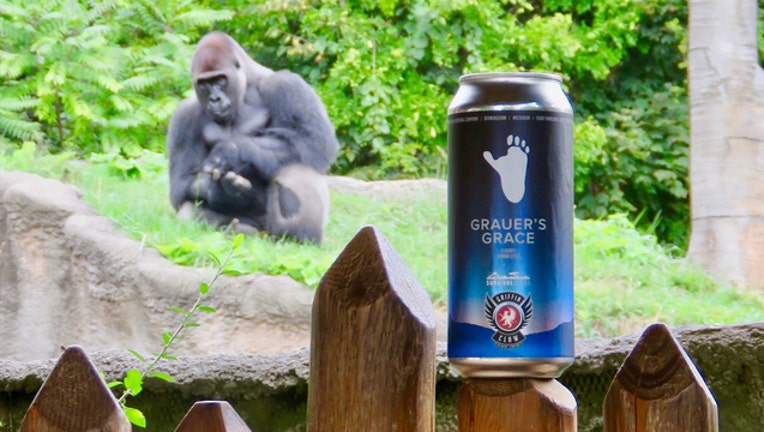 (FOX 2) - A radical new beer flavor has been added to Michigan's long list of notable craft beers. A product of Griffin Claw Brewing Company, the brewery has come out with a hearty banana stout, called the Grauer's Grace.

Canned in a sleek blue container with a matching footprint to follow what it's celebrating, Griffin Claw Brewing has released its beer to shine a spotlight on the Detroit Zoo's conservation work with gorillas. For more meaning on the can's label, you'll first want to turn your attention to the word "Grace."

It stands for the Gorilla Rehabilitation and Conservation Education Center and it's run out of the Democratic Republic of the Congo, which provides rescue, rehabilitative care and reintroduction of the highly endangered Grauer's gorilla - the second word that should catch your eye. The can is a celebration of those conservation efforts to help an endangered species recover in an increasingly hostile environment.

“The GRACE project is one of the most unique conservation, welfare and humane education initiatives we’ve ever been involved with,” said Ron Kagan, executive director of the Detroi Zoological Society and CEO and former chair of the GRACE board. “Now there is a unique beer to help bring awareness to the wonderful work being done to help Grauer’s gorillas.”

The DZS has helped fund GRACE for years and has assisted the center with veterinary care by providing wellness exams of its inhabitants. They've also offered development and humane education programs for children and adults in nearby communities in the Congo. This isn't Griffin Claw Brewing's first commemorative beer however. Grauer's Grace represents the second in a line of beers brewed under the Survival Series label. The first beer was the Piping Plover Pilsner, which highlighted the DZS-led recovery effort of the endangered Great Lakes bird.

Keep an eye out for two more beers that will focus on the Panamanian golden frog and a Tahitian land snail called the Partula nodosa.