GROSSE POINTE FARMS, Mich. (FOX 2) - St. Paul on the Lake Catholic Church is being called out for anti-abortion political signs against Proposal Three.

In Grosse Pointe Farms alongside the mansions on Lakeshore Road sits St. Paul's display on their front lawn, featuring crosses and urging a 'no' vote on Proposal Three.

"I think they do it every year, there's another church on 10 Mile that does it as well," said one woman. "So I think that it's perfectly normal. They should express what they think."

But others do have a problem with it. According to the great-grandson of Henry Ford, Edsel Ford II and his wife, Cynthia, who's on the board of directors of Planned Parenthood of Michigan, emailed the Grosse Pointe Farms city manager.

She complained that the crosses and signs "Diminished the character of our neighborhood and quality of life for residents and visitors."

She threatened to put up large signs with their viewpoint on their own property nearby.

From commercials to Catholic churches, the debate over women's rights or the rights of unborn babies is looking more like a debate over free speech on St. Paul's front lawn.

"You have the right to express yourself, freedom of speech happens on both sides," the resident said.

For their part, church officials say they have worked hard to make sure that the display is in line with city ordinances and have now reached back out to the city to make sure they're in compliance.

The Grosse Pointe Farms city manager told the Detroit Free Press the Proposal three sign was slightly over the size limit and has been brought into compliance.

The signs are temporary and will be removed Wednesday. Grosse Pointe Farms. 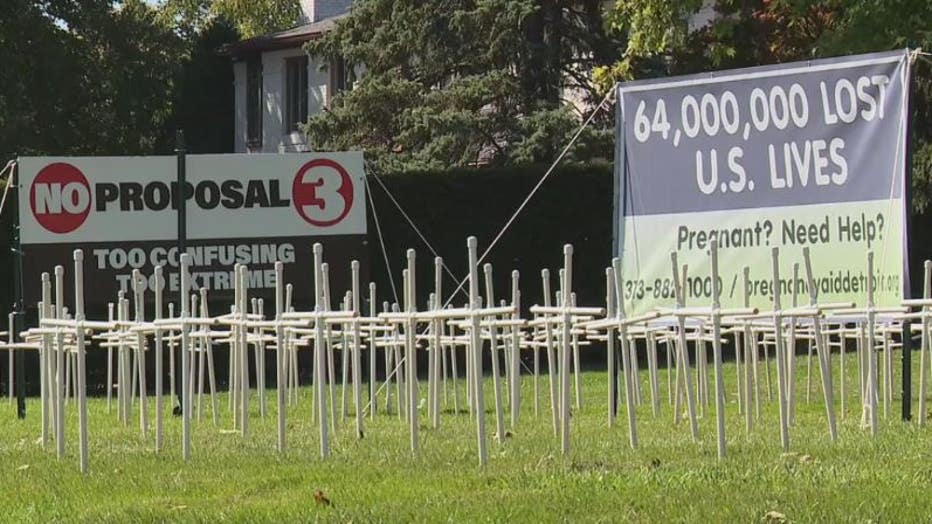