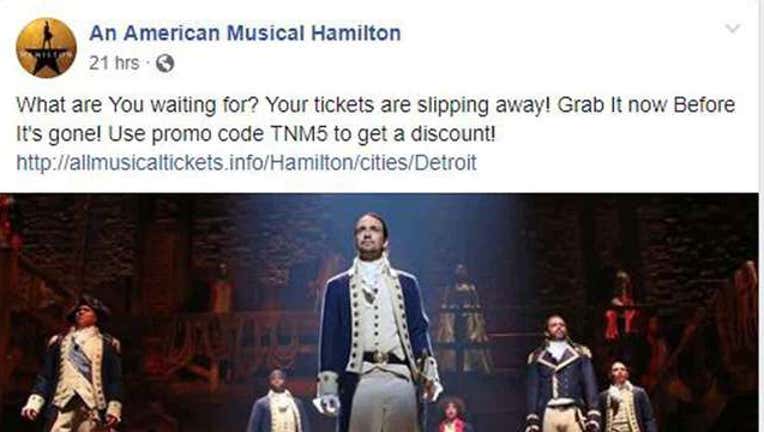 DETROIT (WJBK) - The most talked about stage play in years is making its way to Detroit next spring. "Hamilton" will be at the Fisher Theatre March 12-April 21, 2019.

Chances are everyone you know is planning to try and buy tickets -- so Broadway in Detroit wants to make it very clear that tickets are not on sale yet, so anything you may see on social media right now about purchasing tickets is a scam.

In particular, Broadway in Detroit posted Thursday morning about a Facebook events page that has over 65,000 responses that is, in fact, a scam. It's called "Hamilton in Detroit, MI at Fisher Theatre - MI."

The page has posted several updates - including one within the last 24 hours - urging us to get our tickets now before they "slip away." They even offer a discount code.

The Facebook page then links to an allmusicaltickets website to buy tickets, which redirects to www.ticketnetwork.com. A quick internet search of this website yields very unfavorable reviews, with some saying tickets they purchased here were fake. Broadway in Detroit confirmed this is a scam, and tickets purchased from here will not get you in the show.

Broadway in Detroit also warned the fake page is trying to sell parking for $55, which is also a scam. When you do go to buy (official!) tickets, know that parking at the Fisher Building Lot and Garage is included with every ticket. So don't get scammed into paying for parking, either.

Broadway in Detroit hasn't announced yet when tickets will go on sale, but show tickets typically go on sale about 10 weeks beforehand. Ten weeks before the premiere date of March 12 puts us right at the beginning of January 2019, for an estimated guess. So, keep an ear out around then.

Bottom line, though: be extra vigilant when you join the frenzy for tickets next year. This is a very popular show and scammers will be taking advantage of that.

Follow Broadway in Detroit on social media now, or sign up for their email alerts, to get the accurate information on when and where you can purchase tickets. FOX 2 will let you know, too, when we've heard that official tickets will be on sale.