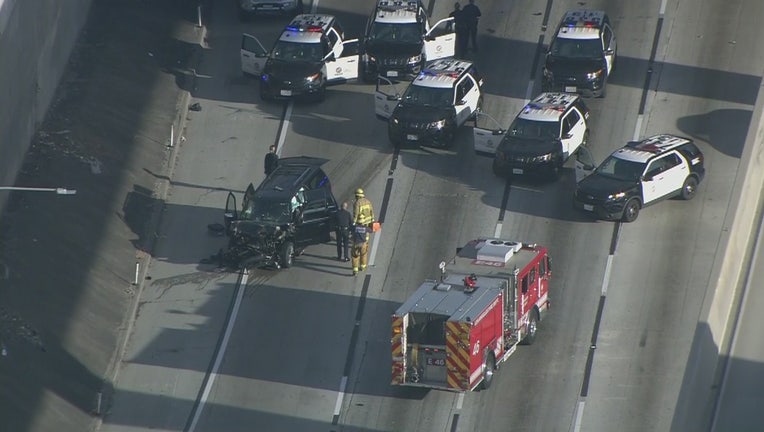 LOS ANGELES - A hearse that was stolen outside a Pasadena church with a woman's corpse inside was involved in a short pursuit before it crashed on the 110 Freeway in South Los Angeles Thursday morning, officials said.

Stolen hearse recovered with body inside

Imagine finding out a hearse has been stolen from a mortuary and your mother's body may be inside. One woman who thinks that happened to her, says she wasn't getting straight answers.

Officials said the black Lincoln Navigator that was customized for mortuaries was stolen Wednesday night shortly after a mortician parked the vehicle outside to deliver another body for an upcoming memorial service at Saint Anthony's Greek Orthodox Church, located in the 700 block of Rosemead Boulevard.

RELATED: Authorities searching for stolen hearse with body in casket

Officials say the deceased body that remained inside the hearse was not connected to the church.

As soon as the luxury hearse was reported missing, the sheriff’s office said there was an all-out search for the vehicle.

Just before 8 a.m. Thursday, officers with the Los Angeles Police Department spotted an SUV with license plates that matched the stolen hearse. The driver failed to stop, leading officers on a chase. The vehicle then crashed on the southbound lanes of the 110 Freeway, striking multiple other vehicles in the process, near Vernon Avenue in South Los Angeles.

Officials shut down the southbound lanes in South Los Angeles for several hours while authorities conducted the investigation.

The Los Angeles County Sheriff's Department confirmed there was a casket containing a deceased body inside the vehicle.

The suspect, later identified as 25-year-old James Juarez, was hospitalized and taken into custody.

Just after 10 a.m., Sky FOX captured aerial images of officials transferring the casket from the wrecked hearse to another Lincoln Navigator in the City of Vernon.

FOX 11 later learned the owners of a funeral home in Arcadia never alerted the family their loved one's corpse and casket were stolen.

UPDATE: Funeral home accused of lying to family of 93-year-old woman whose body was in stolen hearse

Officials Thursday morning transferred a woman's body from a stolen hearse that crashed on the southbound lanes of the 110 Freeway to another Lincoln Navigator that was customized for mortuaries.