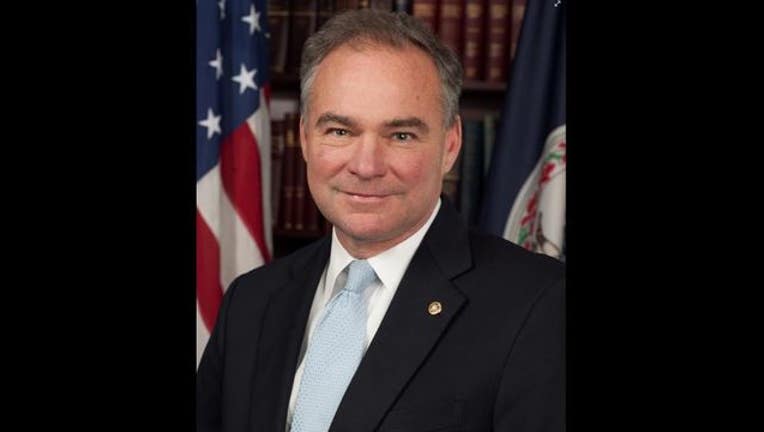 In a text message to supporters, the presumptive Democratic nominee said, "I'm thrilled to tell you this first: I've chosen Sen. Tim Kaine as my running mate."

On Twitter a few seconds later, Clinton described Kaine as "a man who's devoted his life to fighting for others." She called him "a relentless optimist who believes no problem is unsolvable if you put in the work to solve it."

With the pick, Clinton moved into the political spotlight a day after newly crowned Republican nominee Donald Trump closed out his convention with a fiery address accusing his general election opponent of "terrible, terrible crimes."

Kaine, 58, had long been a favorite for Clinton's ticket. Fluent in Spanish and active in the Senate on foreign relations and military affairs, he built a reputation for working across the aisle as Virginia's governor and as mayor of Richmond.

In a recent interview with CBS News, Clinton noted that Kaine has never lost an election during his lengthy political career and praised him as a "world-class mayor, governor and senator." A favorite of Barack Obama since his early 2008 endorsement, the president told Clinton's campaign he believed Kaine would be a strong choice during the selection process, according to a Democratic familiar with the search who was not authorized to discuss it publicly.

Those views are not shared by some liberals in the Democratic Party, who dislike his support of free trade and Wall Street. They pushed Clinton to pick Massachusetts Sen. Elizabeth Warren or Ohio Sen. Sherrod Brown, intensifying their criticism of Kaine late this week as his selection appeared imminent.

Clinton's campaign largely declined to comment on the search process, trying to keep the details — even the names of the finalists — under wraps to try to maximize the impact of their announcement. She made no mention of her impending pick during a somber meeting Friday with community leaders and family members affected by the Pulse nightclub shooting in Orlando and a later campaign rally in Tampa.

She is expected to campaign with Kaine on Saturday morning at an event in Miami.

As Clinton prepared to make her VP pick Friday, Trump met with supporters at his convention hotel in Cleveland to run through a long list of thank-yous after the end of his four-day coronation as head of the Republican Party.

But rather than stay focused on Clinton or reach out to the general election voters he now must court, the newly minted Republican nominee spent considerable time stoking the fire of his bitter quarrel with Republican former rival Ted Cruz. "Ted, stay home," Trump said, dismissing any interest in an endorsement the Texas senator refuses to provide. "Relax. Enjoy yourself."

Trump boasted of his TV ratings, his primary victories and other achievements, including winning over his wife,Melania, in a stream-of-consciousness delivery with his vice presidential nominee, Indiana Gov. Mike Pence, standing quietly nearby.

"I don't do anything unless I win," Trump insisted. He promised to work "so hard" as the nominee and vowed his campaign was "not going to disappear," even though he has no plans to campaign this weekend and no events on his schedule for next week.

No matter, perhaps, as that time will belong to Clinton and the Democrats, whose own convention begins Monday in Philadelphia. Kaine, who won election to the Senate in 2012 after serving as Obama's first chairman of the Democratic National Committee, will likely speak in the slot reserved for the vice presidential pick on Wednesday night.

Before entering politics, Kaine was an attorney who specialized in civil rights and fair housing. He learned Spanish during a mission trip to Honduras while in law school, an experience he still references on the campaign trail. During his political career, he's demonstrated an ability to woo voters across party lines, winning his 2006 gubernatorial race with support in both Democratic strongholds and traditionally Republican strongholds.

His wife, Anne Holton, is the daughter of a former Virginia governor, a former state judge and, currently, the state's Education Secretary. The couple has three children.

Clinton selected him to join the ticket from a group of candidates that included Agriculture Secretary TomVilsack, Labor Secretary Tom Perez and Colorado Gov. John Hickenlooper.

Clinton's plans to pick Kaine, hinted at for several days leading up her Friday announcement, had been viewed as a safe choice against the Republican ticket of Trump and Indiana Gov. Mike Pence.

Some Democrats believe Trump's selection of Pence, a conservative white man from a largely Republican state, freed Clinton from pressure to add another woman or minority to her ticket. Her short list included Warren, two Latino cabinet secretaries and New Jersey Gov. Cory Booker, one of two black U.S. senators.

Democrats argue that Kaine could help her woo moderate and even some Republican voters turned off by Trump's provocative rhetoric, which was at the center of his 75-minute Thursday night acceptance speech. Trump pledged to restore a sense of public safety, strictly curb immigration and save the nation from Clinton's record of "death, destruction, terrorism and weakness."

Democrats offered a different assessment of the state of the nation. Obama said Friday that Trump painted a picture that "doesn't really jibe with the experience with most people."

At a White House news conference with Mexican President Enrique Pena Nieto, Obama said crime rates, especially those for violent crime, are lower than at any time in the past 30 years. He noted violent crime has recently risen in some cities, "but we're not going to make good decisions based on fears that don't have a basis in fact."

Kaine got some practice challenging Trump's message when he campaigned with Clinton last week in northern Virginia, where he spoke briefly in Spanish and offered a strident assault on Trump's White House credentials.

What political news is the world searching for on Google and talking about on Twitter? Find out via AP's Election Buzz interactive. http://elections.ap.org/buzz