Republicans' request on revisiting foreign aid, the other element of Trump's twofold objections to the stimulus and spending legislation, was put forward by Rep. Rob Wittman, R-Va.

The brief and unfruitful exchange of political barbs came as it's still unclear whether Trump will veto the original piece of legislation. Even as he attacked it Tuesday he did not explicitly say he'd veto it.

Trump on Tuesday night released a scathing video in which he called panned $600 stimulus checks for Americans as too small, saying the number should instead be $2,000.

He also demanded that "wasteful and unnecessary" spending – Trump specifically listed foreign aid to several countries, along with a few other line-items – be cut from the year-end spending package which lawmakers married to the coronavirus aid so it could all be passed in one vote.

"A few months ago, Congress started negotiations on a new package to get urgently needed help to the American people. It's taken forever," Trump said. "However, the bill they are now planning to send back to my desk is much different than anticipated. It really is a disgrace."

Some lawmakers, especially in the House Freedom Caucus, voiced process objections to the way the monstrous, 5,000-page-plus legislation was moved through Congress in one fell swoop, saying it should have been split into several votes. Trump, however, appeared to confuse the reason for why the spending and the stimulus came to his desk at the same time.

But that nuance mattered little to Democrats. They immediately seized on Trump's comments to taunt Republicans and call for them to get on board with the $2,000 checks, which many in the GOP opposed throughout the monthslong coronavirus negotiations process from which the president was largely absent.

House Speaker Nancy Pelosi, D-Calif., swiftly announced plans to bring a stand-alone piece of legislation to the House floor Thursday in a pro forma session, to boost the stimulus checks to $2,000. By asking for unanimous consent to pass it essentially dared House Republicans to object — which they did.

"Mr. President, sign the bill to keep government open! Urge McConnell and McCarthy to agree with the Democratic unanimous consent request for $2,000 direct payments! This can be done by noon on Christmas Eve!" Pelosi tweeted Wednesday.

"[B]y waiting days before Christmas, Speaker Pelosi tried to use the American people as leverage to make coronavirus relief contingent on government funding — which includes billions of foreign aid at a time when there are urgent needs at home," McCarthy said in a letter to GOP lawmakers.

He added: "House Democrats appear to be suffering from selective hearing. They have conveniently ignored the concerns expressed by the President, and shared by our constituents, that we ought to reexamine how our tax dollars are spent overseas while so many of our neighbors at home are struggling to make ends meet. Thus, Republicans will offer a unanimous consent request to revisit the State and Foreign Operations title of the Omnibus so that we can fully address the concerns at hand." 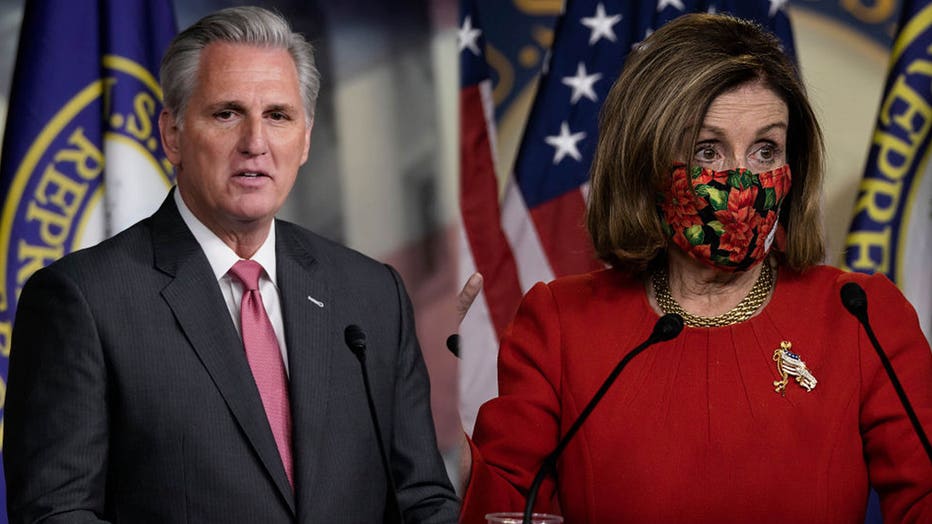 Pelosi's office did not respond to a request for comment on McCarthy's plans made Wednesday night.

The floor stalemate Thursday leaves lawmakers and the president right where they were when Trump first released his Twitter video on the stimulus and spending Tuesday night.

Even if one or both of the unanimous-consent requests had passed the House, both would have highly uncertain prospects of succeeding in the GOP-controlled Senate.

Sen. Ron Johnson, R-Wis., objected to an effort to make the checks in the just-passed stimulus bill $1,200 instead of $600, so it is nearly certain that he or another Senate Republican would have scuttled that unanimous consent request if it did make it to the Senate.

The political maneuvering in the House comes as Trump, who departed D.C. for Mar-a-Lago Wednesday, is also bringing a government shutdown back into the equation by not signing the funding package. The government is currently operating on a one-week spending bill that was mean to keep the lights on just long enough for the president to sign the omnibus legislation that would fund the government for the next year.

Further, unemployment benefits for many Americans are set to run out the day after Christmas. Multiple other pandemic-related benefits, including an eviction moratorium, are set to run out before the end of the year. The House is set on Monday to revisit the interim spending bill to make it last into the new year, which could potentially avert a shutdown if the interim bill makes it through the Senate and the president agrees to sign it.

Trump on Tuesday did not issue an explicit veto threat on the spending and stimulus, so some are still hopeful that the president will sign the legislation as is. But he could also utilize a rare "pocket veto," holding on to the legislation and refusing to act on it.

That would force Congress to essentially restart the legislative process on the stimulus and spending back at square one.