LANSING, Mich. - With Michigan's COVID-19 cases showing a gradual decline in new cases, many public officials are shifting their focus toward restarting the state's economy.

Advocating for a "risk-based, regional approach" to jumpstarting Michigan's industries, the House GOP has released a roadmap aimed at guiding the state's economy forward. The Senate released its own approach last week.

Using a three-tiered system, counties would be divided by the level of risk they face. The higher the risk, the more restrictions businesses, residents and public services must operate under. The plan also calls for the creation of a Transition Task Force that would deem sectors of the industry "safe" in areas with low risk while assisting with the development of best practices and safety protocols for businesses.

Under Tier 1, which would likely encompass Wayne, Oakland, and Macomb Counties, the same restrictions that are in place under the governor's order would apply, except for rules mandating retail stores above 50,000 square feet close parts of their business.

Under Tier 2, dubbed "Heightened Risk" similar restrictions would remain but with several changes:

Under Tier 3, dubbed "Standard Risk" the governor's Stay Home, Stay Safe rule would not apply to people who aren't vulnerable, however, restrictions on the capacity for some businesses would remain: 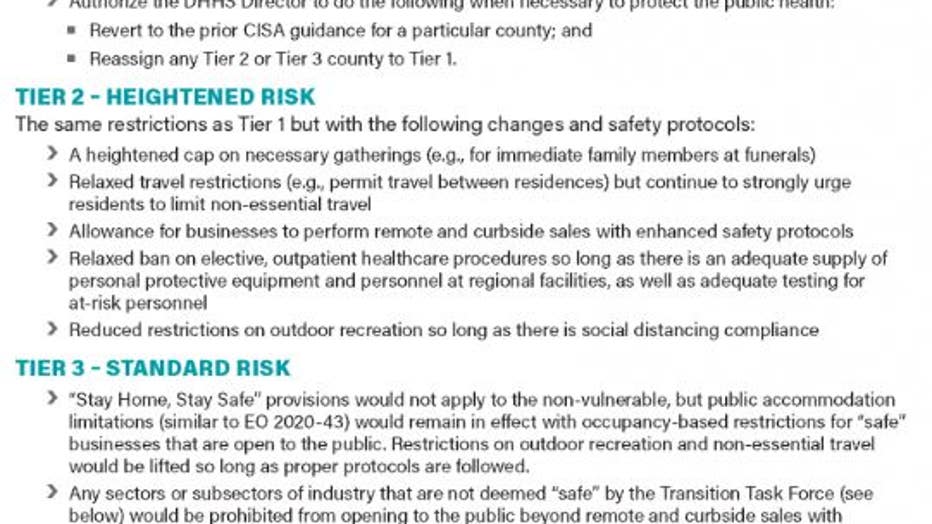 Once this transition phase is over, lawmakers could reassess the next best steps for getting the economy up and running again. That likely wouldn't happen until Michigan's most at-risk counties could be downgraded from Tier 1 to Tier 2 and every other county to Tier 3.

Michigan Gov. Gretchen Whitmer is expected to release her own plans for reopening the state's economy later this week.