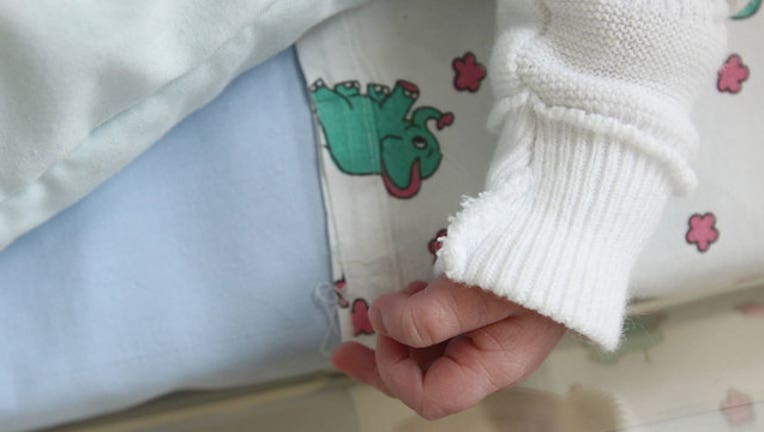 A 4-day-old newborn baby lies in a baby bed in the maternity ward of a hospital on August 12, 2011 in a city in the east German state of Brandenburg, Germany. (Photo by Sean Gallup/Getty Images)

Sarah Sherbert's first child was whisked away to a hospital special-care nursery for two weeks of treatment for withdrawal from doctor-prescribed methadone that her mother continued to use during her pregnancy. Nurses hesitated to let Sherbert hold the girl and hovered nervously when she visited to breast-feed.

Born just 15 months later and 30 miles away at a different South Carolina hospital, Sherbert's second child was started on medicine even before he showed any withdrawal symptoms and she was allowed to keep him in her room to encourage breast-feeding and bonding. His hospital stay was just a week.

The different approaches highlight a sobering fact: The surge has outpaced the science, and no one knows the best way to treat the opioid epidemic's youngest patients.

Trying to cope with the rising numbers of affected infants, hospitals around the United States are taking a scattershot approach to treating the tremors, hard-to-soothe crying, diarrhea and other hallmark symptoms of newborn abstinence syndrome.

With help from $1 million in National Institutes of Health funding, researchers are seeking to change that by identifying the practices that could lead to a national standard for evidence-based treatment. A rigorous multi-center study comparing treatments and outcomes in hard-hit areas could start by the end of this year, said Dr. Matthew Gillman, who is helping lead the effort.

"When there's so much variability in practice, not everyone can be doing the very best thing," Gillman said.

Once the umbilical cord is cut, babies born to opioid users are at risk for developing withdrawal symptoms. By some estimates, one infant is born with the condition in the U.S. every 25 minutes. The numbers have tripled since 2008 at a rate that has solid medical research comparing treatments and outcomes struggling to keep pace.

Not all opioid-exposed babies develop the syndrome, but drug use late in a pregnancy increases the chances and can cause dependence in fetuses and newborns. These infants are not born with addiction, which experts consider a disease involving compulsive, harmful drug-seeking behavior. But the sudden withdrawal of opioids from their mothers may cause increased production of neurotransmitters, which can disrupt the nervous system and overstimulate bodily functions. Symptoms can last for months.

The condition can result from a mother's use of illicit drugs, but it also can stem from mothers being prescribed methadone or other anti-addiction medicine. Doctors believe the benefits of that treatment for the mothers outweigh any risks to their infants.

The Centers for Disease Control and Prevention doesn't routinely track the condition, but the agency's most recent data -- from 2014 -- indicates that the syndrome affects nearly 11 in every 1,000 U.S. births. The CDC said it is working with the March of Dimes and several states to get a better picture of the number of affected infants and how they fare developmentally and academically into childhood.

Some studies have suggested possible increased risks for developmental delays and behavior problems, but no research has been able to determine if that's due to mothers' drug use during pregnancy, infants' treatment after birth or something completely unrelated. And there's no definitive evidence that these children fare worse than unexposed youngsters.

"It's very, very frustrating" not knowing those answers, Devlin said. "It's such a difficult population to go back and do research on. They're people who often don't trust the system, often people who have had lots of trauma in their lives."

Treatment aims to reduce or even prevent symptoms. Some hospitals use morphine drops, while others use methadone and sometimes sedatives. Some send the babies straight to newborn intensive care units and some focus on comfort care from moms, allowing them to room-in with their infants. A recently published Dartmouth-Hitchcock Medical Center analysis linked rooming-in with less medication use and shorter hospital stays for infants, but it can be difficult if mothers are still in the throes of addiction.

A Florida hospital is even testing tiny acupuncture needles on affected infants.

Many hospitals use a 40-year-old scoring system to measure 21 symptoms and frame diagnosis and treatment length, but some have created their own scales.

The Government Accountability Office's health care team has called for federal action to address the issue, saying the current recommendations from the U.S. Health and Human Services Department amount to a half-baked strategy lacking priorities and a timeline for implementation.

The department's recommendations include education for doctors and nurses to teach them how to manage affected infants, along with an emphasis on non-drug treatment.

Katherine Iritani, director of the GAO's health care team, said government officials have since indicated that they are convening experts to develop and finalize a plan by March 15.

"We'll review it and make sure it's responsive to our recommendations," she said.

Medicaid pays for more than 80 percent of costs for treating affected babies, totaling about $1 billion in 2012, the GAO has found.

At Greenville Memorial Hospital, where Sarah Sherbert's son was delivered two years ago, babies born to methadone users are given that drug before symptoms start and are sent home with a supply to continue treatment.

Clemson University research has showed that approach could reduce hospital stays by nearly half, to an average of eight days costing $11,000 compared with the state average of 15 days at a cost of $45,000.

"The baby has already been exposed to methadone for nine months so adding four to five weeks and making weaning gentle instead of quitting cold turkey we think won't have any additional effect on babies' brain development," said Dr. Jennifer Hudson, who developed the treatment approach.

Sherbert, 31, said her drug use began eight years ago after she was prescribed opioid painkillers for injuries from a car accident. She was on methadone prescribed by her doctor when her daughter, now 3, was born.

She later lost custody after relapsing and her parents are caring for the children. Sherbert said she has been sober for a year and recently was promoted to supervisor at her job. She said she's determined to get them back.

"I've worked so hard and come such a long way," she said. "Seeing their little faces -- that's worth every bit of it."