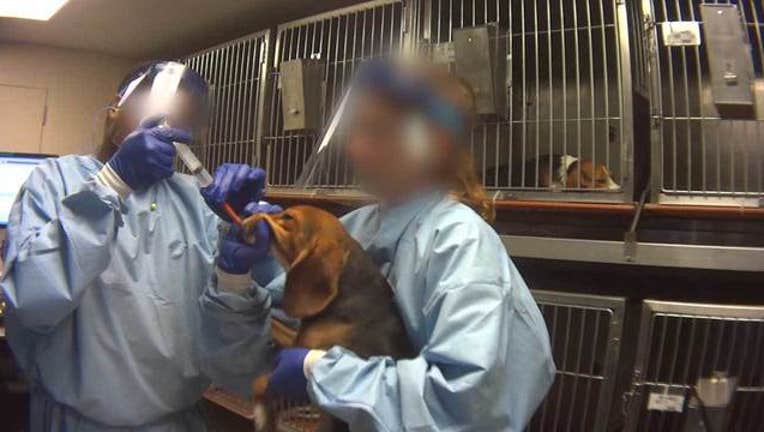 Image: The Humane Society of the United States

MATTAWAN, Mich. (FOX 2) - In an undercover investigation, the Humane Society of the United States says it witnessed dogs being force-fed fungicides at a laboratory in Michigan - and that the dogs will be euthanized this summer as part of the test.

The society is now pushing for the immediate release of the animals from the lab.

"Our investigator, who spent nearly 100 days at the facility, documented the dogs cowering, frightened, in their cages with surgical scars and implanted with large devices. Dogs being force-fed or infused with drugs, pesticides and other products, using crude methods, many that are unlikely to ever be used in humans," the Humane Society said on its website.

In one experiment, the humane society says the lab was hired to use 36 beagles in a yearlong pesticide test for a new product being developed by Corteva Agriscience, which is a division of DowDuPont. The society says beagles are typically used in testing because of their "docile nature."

The society says their investigator saw beagles being force-fed fungicides, with some subjected to very high doses. The report alleges that in some cases up to four capsules were shoved down the dogs' throats.

The society alleges the dogs in that test who haven't already died from the pesticides will be euthanized in July 2019 so that their organs can be assessed for damage.

The society says fungicides are considered pesticides and are regulated by the Environmental Protection Agency. At one time, the EPA required that dogs be force-fed pesticides for a full year but eliminated this requirement 10 years ago when scientists realized that the test did not add valuable scientific information, the society wrote in their report.

Corteva told the Associated Press the animal testing is required by regulators in Brazil. Fox 2 Detroit has left a message with Corteva Agriscience for additional comment.

Dow said on Twitter: "Animal testing is not something Dow undertakes lightly, but neither is it something the Company can discontinue when it is required by regulatory authorities. Dow keeps its use of animal testing to an absolute minimum. Dow is committed to finding alternatives to animal testing and has established a Predictive Toxicology team dedicated to this goal."

The lab said it's committed to treating animals ethically.

The Humane Society has put together a petition demanding Dow AgroSciences immediately stop the tests and surrender the 36 beagles to their care. You can read more about their undercover investigation and get more information on the petition here.

Information from The Associated Press was used