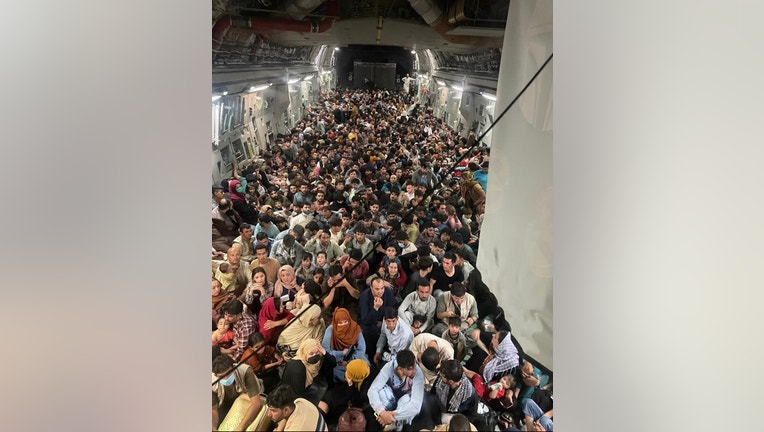 KABUL, Afghanistan - A viral photo depicts just how desperate many Afghans are to flee their native land after the Taliban seized control of the capital city Kabul over the weekend.

The U.S. Air Force posted the picture on its Instagram page Tuesday showing a C-17 plane packed with hundreds of people. Many men, women and children appeared to have only the clothes on their backs and no additional luggage.

According to Defense One, approximately 640 Afghans were packed inside the C-17 seen in the photo with the flight heading from Afghanistan to Qatar.

Air Force officials said this wasn’t the same plane that was seen in other videos with Afghans clinging to the landing gear as it taxied on the runway to take off. Some of them apparently fell to their deaths as the aircraft gained altitude.

U.S. authorities said that all told, at least seven people died during the chaotic evacuation at the airport, including several who fell from a military jet.

News reporters pressed Pentagon officials about the crowded flight during a news conference Monday, but officials said they didn’t have any information.

"We're obviously just as interested in you and learning more about what — what happened there," Pentagon Press Secretary John Kirby told reporters. "Again, I don't have any additional information about that particular aircraft in that particular flight."

President Joe Biden on Aug. 16, 2021, called the Taliban capture of Afghanistan gut-wrenching but rejected blame for what's happening and stood behind his decision to pull U.S. troops out after a 20-year war.

Pentagon officials confirmed they were making space for an additional 22,000 refugees seeking asylum in the U.S. at sites in Fort Bliss, Texas and Camp McCoy, Wisconsin.

The Taliban swept into Afghanistan’s capital Sunday after the government collapsed and the embattled president joined an exodus of his fellow citizens and foreigners, signaling the end of a costly two-decade U.S. campaign to remake the country. Heavily armed Taliban fighters fanned out across the capital, and several entered Kabul’s abandoned presidential palace.

RELATED: Taliban seizes Afghanistan: What happened and what could come next

Evacuation flights resumed after being suspended on Monday, when thousands of people rushed the airport. In shocking scenes captured on video, some clung to a plane as it took off and then fell to their deaths. At least seven people died in the airport chaos, U.S. officials said.

On Tuesday, the Taliban entered the civilian half of the airport, firing into the air to drive out around 500 people there, said an Afghan official who spoke on condition of anonymity because he wasn’t authorized to brief journalists.

The Taliban appeared to be trying to control the crowd rather than prevent people from leaving. A video circulating online showed the Taliban supervising the orderly departure of dozens of foreigners.

The Taliban have agreed to allow "safe passage" from Afghanistan for civilians struggling to join a U.S.-directed airlift from the capital, Biden's national security adviser said Tuesday, although a timetable for completing the evacuation of Americans, Afghan allies and others has yet to be worked out with the country's new rulers.

Kirby disclosed that U.S. officers were speaking with Taliban commanders "multiple times a day" about avoiding conflict at the airport. This suggested that the new rulers of Afghanistan, who swept to power after 20 years of war against the U.S.-supported Kabul government, plan not to disrupt the evacuation. Kirby would not discuss details of the Taliban arrangement, and Sullivan said the question of how much time the Taliban will give the evacuation was still being negotiated.

Biden has said he wants the evacuation completed by Aug. 31.

The U.S. Embassy in Kabul, now operating from the military side of the airport, urged Americans to register online for evacuation but not to come to the airport before being contacted.